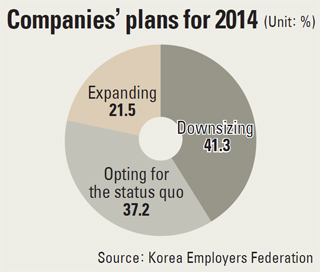 A survey by the Korea Employers Federation (KEF) of the heads of 278 companies showed that 41.3 percent said they will downsize their business plans next year, citing unfavorable domestic economic conditions.

Of the CEOs, only 21.5 percent said they will expand, while the rest, or 37.2 percent, opted for the status quo.

According to a different survey by the Federation of Korean Industries (FKI), more than 80 percent of local conglomerates predict that the domestic economy’s slump this year will continue into 2014. They said recovery will start as late as the second half of next year.

The government is envisaging the economy to grow 2.7 percent this year from a year earlier, lower than the estimate of average global economy growth, 2.9 percent. This year is well on track to see another record-high trade surplus for Korea, but it is a recession-type surplus, in which anemic exports outstrip poorly performing imports. Korea’s exports in the first 10 months of this year grew only 1.9 percent from the same period a year earlier.

More than four in 10 CEOs surveyed by the KEF were concerned that Korea is entering a period of enduring stagnation, while only 18.1 percent of those surveyed said the economy has entered a recovery phase.

Finance Minister Hyun Oh-seok said growth next year will recover to 3.9 percent, but the CEOs in the KEF survey were more pessimistic, predicting growth at 3.2 percent on average.

In the FKI survey, conducted on the 600 top companies in Korea in terms of sales, 58.1 percent predicted that the economy will grow at less than 3 percent next year.

During a forum on Thursday, the Institute for the Future of State, a think tank for the Park administration, gave a letter grade of C to the economic policy of the government, saying its financial policy was short-sighted and economic vitalization measures were ineffective.

“Our economy will recover a 3 percent range of growth next year,” said Park Yong-maan, chairman of the Korea Chamber of Commerce and Industry during a year-end meeting with reporters on Thursday, “but the growth will not be so significant as to make a difference in how people feel.”

The KEF survey showed that the CEOs were worried most about stagnant demand from the domestic market; 32.5 percent of the surveyed cited it as their biggest concern. But 29.5 percent said a deteriorating condition for exports was their primary concern. As for conglomerates, 33.8 percent were more concerned about conditions for exports than for domestic sales.

The Hyundai Research Institute said in a report released yesterday that the won will remain strong against the yen next year, bad news for Korean exporters competing with Japanese companies.

In the FKI survey, 72.9 percent of the companies said an economic expansion policy should be the government’s top priority next year.