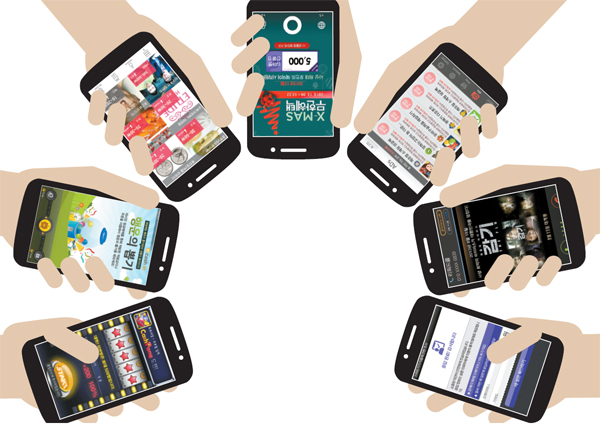 A 30-year-old housewife surnamed Chun frequently plays with her smartphone at home.

The mobile app is a “reward application.” When users check their smartphones or participate in events, they earn points that can be redeemed for cash or coupons.

“Using my spare time to check this app, I do collect some money that is enough to buy coffee two or three times [per month] with my husband,” Chun said. “Some of my neighbors and friends strongly believe they will earn pocket money through this reward app.”

According to data from KT’s economic and business research institute Digieco, the market for these applications is growing fast.

Because people can make money through the application, so-called app money tech is rising among smartphone users.

However, there are also concerns that it’s not worth the trouble considering how much time it takes to accumulate small rewards.

Some people even predict it could follow in the business footsteps of Gold Bank, which grew in popularity in the late 1990s but went out of business after people questioned the effectiveness of its advertising and a controversy involving a fabrication of the number of clicks on ads.

According to Digieco, reward apps can be divided into two types of categories: constant exposure and participation. Both promote themselves as “catching two birds with one stone,” as people can make money while playing on their smartphones.

The former uses people’s habits of looking at smartphones to check the time or weather even if there are no phone calls. For example, if users allow a certain company’s ad to appear on their smartphone’s lock screen, the app will award points.

There is even an ad that shows up on the screen when people receive phone calls. These application companies receive their revenue from advertised products and give back a percentage of the amount to consumers.

Users then can get cash back or receive gifts with their collected points, although specific conditions differ by company.

The participation app requires users to be more active. For example, users must solve puzzles, take quizzes, play games or finish surveys to receive points. There is even a lottery-type system that gives a million won worth of points to a user selected from among those who leave messages on a particular ad. Consumers can also get a lot of points by offering personal information such as email addresses and phone numbers.

“It’s like you get compensated by completing such a mission,” said Seo Hye-eun, who is a manager at Idincu, which runs the reward app Ovey. “Because of the app’s characteristics, it is utilized in various ways, not only in advertising but also in surveys and collecting data for research.”

According to data from Digieco and DMC Media, a digital marketing research company, 76 percent of smartphone users know about these reward apps and 37 percent of them have used one of them within the past year. More than half of the users were in their teens or 20s.

“The reward app’s strong point is that it satisfies the needs of both the user and advertiser,” said Ryu Sung-il, a researcher at Digieco. “Unlike Gold Bank, which debuted in the era of one PC for one household, it is a business model based on one smartphone for one person, so it has potential.”

Since reward apps surfaced in 2011, hundreds have appeared and now, corporations like CJ E&M, NHN and Daum are entering the market.

“Because it [reward app] has the advantage of offering customized advertising based on a user’s gender and age, it receives a lot of attention as a new ad platform,” said Lee Suke-kyu a professor at Sungkyunkwan University’s Business School. “In particular, it can make various types of ads, and since the ads can be checked any time, it maximizes the characteristics of mobile devices. I think the market will grow bigger.”

As the popularity of reward apps increases, many online cafes and groups are emerging, too, to share information and characteristics of each reward app. There is even an application that lists all the reward apps, showing how much money users can make.

Some reward app companies are patenting their marketing methods and filing lawsuits against rivals.

But big anticipation also brings big concern. As more reward apps come to the market, there are more complaints from consumers. According to a survey from DMC Media, 56 percent have answered that they are not using reward apps because the compensation is too little.

Others worry about the exaggerated claims of advertisements.

Some advertisements claim that users can collect millions of won per month, which can result in get-rich-quick fever.

Critics worry about the influence of these apps on children since there are no regulations or age limits.

“Excluding the limited number of users who always play with their reward apps, it is difficult to earn big money,” an official related with reward app companies said on the condition of anonymity.

“It is getting popular because of the economic slump these days, but there is lot of exaggeration when people say they can have a second because of the high profits from reward apps,” the official said.

Experts point out that users also need to be careful. Since most reward apps introduced recently ask people to download the program or additional content, there could be big data usage leading to higher charges. In addition, too many reward apps could slow down the operation speed of their smartphones and quickly wear out batteries.

“It is true that the risks for consumers also are growing because so many reward apps spring up like mushrooms after it rains,” said Ryu at Digieco. “In particular, if a company is small and petty, there is always the possibility that all collected points could be useless when they shut down the service and disappear.”

Experts said it is important to check out the user’s agreement before registration and look into service ranges because not all stores accept points from reward apps.

Meanwhile, reward app developers also have their own concerns, mostly about so-called cherry pickers who excessively participate in events and click the ad hundreds times in a day to collect benefits.

Companies said they are trying to come up with measures such as regulating the number of times an ad can be watched and limiting a single user’s event participation per hour to prevent duplication of points.