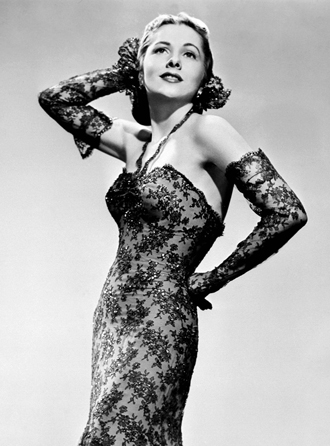 This April 1945 file photo shows actress Joan Fontaine. She died at the age of 96 on Sunday. [AP/NEWSIS}

Among Fontaine’s most memorable films was the Alfred Hitchcock picture “Suspicion,” co-starring Cary Grant, for which she won an Academy Award in 1942, beating out her older sister in the competition.

The honor gave Fontaine the distinction of being the only performer, actor or actress, ever to win an Academy Award for a starring role in one of Hitchcock’s many movies.

De Havilland, who was nominated that year for “Hold Back the Dawn,” went on to win two Oscars of her own for leading roles in the 1946 film “To Each His Own” and the 1949 picture “The Heiress.” Now aged 97, de Havilland resides in Paris.

Her Oscar victories established the sisters as the only siblings ever to both win Academy Awards for acting.

Fontaine also earned Oscar nominations for her star turns in Hitchcock’s 1940 American debut, “Rebecca,” co-starring opposite Laurence Olivier as a young bride haunted by the memory of her husband’s deceased first wife; and the 1943 romantic drama “The Constant Nymph,” falling for a dashing composer played by Charles Boyer.

She wrote in her 1978 autobiography, “No Bed of Roses,” that her sickly condition as a child actually helped develop her acting skills.

In her sickbed fantasies - pillow dreams, she called them - Fontaine created “endless scenes of romance, passion, jealousy, rejection, death. I built and decorated houses, steamships, ballrooms. I designed sets and costumes, cast roles and played them all myself,” she wrote.

Her childhood marked the beginning of a rivalry with de Havilland as they competed for parental attention.

“I regret that I remember not one act of kindness from her all through my childhood,” Fontaine wrote.

De Havilland reportedly saw her younger sister as a sneaky attention-getter, melodramatically playing sick and trying to outdo her.

The competition was more fierce in 1942 when both sisters were nominated for Oscars and Fontaine took home the statuette for “Suspicion,” in which she played an English woman who begins to suspect her charming husband of trying to kill her.

“It was a bittersweet moment,” Fontaine later recalled. “I was appalled that I won over my sister.”