Unlike Christianity, Buddhism and Confucianism, the images Taoism evokes in people may be not as clear.

However, Taoism - or the Taoist culture in Korea, to be more specific - is in fact, closer to us and easier to grasp than most people think.

Besides the symbols of yin and yang, Taoist ideas can be found in the famous landscape painting of a sun, moon and five mountaintops from the Joseon Dynasty (1392-1910), often put behind the royal throne; peach-shaped celadon water droppers; and in works from the legendary painter Kim Hong-do (1745-1806) of the Joseon era.

The Taoist culture in Korea, in particular, was combined with a belief in sinseon, or imaginary immortal beings who have magical powers.

And such themes can be found in popular content, too, like the 2009 film “Jeon Woochi: The Taoist Wizard” and the 2012 drama of the same name. Jeon Woochi, whose story is recorded in unofficial history tales, was a famous Taoist magician of the Joseon era. The film revolves around Jeon and Taoist immortals.

The National Museum of Korea has now chosen Taoism for its last special exhibition of this year. It kicked off an exhibition titled “Taoist Culture in Korea: The Road to Happiness” on Dec. 10, which it says is the first large-scale exhibition dedicated solely to Taoism.

“Along with Confucianism and Buddhism, Taoism was one of the three religions that formed the basis of Korean culture,” the museum said. “Even until now, it is within our daily lives - in the forms of seasonal customs, faith, arts, popular culture and health practices.”

Three hundred artifacts - including seven national treasure items and four treasure items - are being showcased. They include paintings, ceramics, books, folk art and craft work ranging from ancient times to the Joseon era.

“The Sun, Moon and Five Peaks” (left), in the front, and “Heavenly Peaches,” in the back, is a rare two-sided painting that is being revealed for the first time to the public.

“When we talk about Taoism, we always face the question, ‘Just what is Taoism?’?” An Gyeong-suk, a curator with the museum’s ancient history department, said. “We hope the exhibition gives an opportunity to the people to re-examine Taoism, which has been largely undervalued compared to Confucianism and Buddhism.”

During the Warring States period (403-221 BC) in China, all kinds of health practices and medicines that claimed to help people become Taoist immortals were fashionable. Oftentimes, they used poisonous elements such as mercuric sulfide. In fact, many died due to mercury poisoning.

Taoism, the philosophical and religious tradition that originated from China, arrived on the Korean Peninsula around 624, according to historical records, which was during the Three Kingdoms era (57 BC-AD 668), more than 300 years after Buddhism was introduced in Korea. Among the three kingdoms, namely Goguryeo, Silla and Baekje, only Goguryeo actively adopted Taoism.

During the final years of the Unified Silla Period (676-935), however, Taoism became more popular through scholars who studied in China’s Tang Dynasty (618-907). However, instead of drinking the “elixir of life,” which caused extreme side effects, believers in Korea adopted health practices such as certain diets or breathing methods.

In fact, some famous government officials and elites, like Kim Si-seup (1435-93) and Yi Hwang (1501-70), engaged in such practices, artifacts on display at the exhibition show. 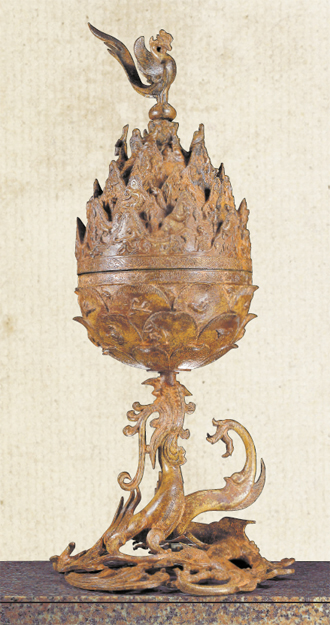 The Gilt-bronze Incense Burner of Baekje, from the sixth or seventh century, is National Treasure No. 287.

There are two artifacts that are being revealed for the time.

One is “The Sun, Moon and Five Peaks” from the Joseon Dynasty.

There are several paintings like this, but the museum explains that this one is the “best and the oldest.”

“It’s being revealed for the first time after going through preservation work,” the museum said. “We believe it was placed in the Haminjeong structure of Changgyeong Palace.”

Officials said their analysis also found that while most such paintings from the 20th century use imported paints, this one used natural paints, leading them to believe it was created earlier, perhaps in the 19th century.

The painting is considered to embody Taoist beliefs of the five elements, which refer to the changing cycles of nature that regulate the Earth’s life. They are water, wood, fire, earth and metal.

What’s amazing is that in the back of the painting is another, titled “Heavenly Peaches,” which depicts peaches that are believed to be grown every 3,000 years in the orchard of a Taoist goddess. Peaches, which symbolize longevity, often appear in Taoist tales and arts.

Another artifact is a book on Taoism created in 1441 using movable metal type. Named “Taoist Scripture,” it was found in the tomb of a 16th-century government official, Sin Eon-sik.

Korea’s “Jikji Simche Yojeol,” a book that contains the essentials of Zen Buddhism and the oldest book printed using movable metal type, was created in 1377. The second-oldest, Germany’s 42-line Gutenberg Bible, was printed in 1455.

Visitors also must not miss the gorgeous Gilt-bronze Incense Burner of Baekje, from the sixth or seventh century, which is National Treasure No. 287.

It is rare to be able to enjoy the relic in Seoul for about three months, National Museum of Korea officials say.

The relic, which was used in Buddhist rituals but whose engravings depict the world of Taoist immortals, is from the Buyeo National Museum in Buyeo, South Chungcheong.

Another must-see artifact is the 1776 painting, “Taoist Immortals,” by Kim Hong-do, National Treasure No. 139.

*“Taoist Culture in Korea: The Road to Happiness” runs until March 2 at the special exhibition gallery of the National Museum of Korea in Yongsan District, central Seoul. Admission is free. The museum is open until 9 p.m. on Wednesday and Saturday; 7 p.m. on Sunday; and 6 p.m. Tuesday, Thursday and Friday. It is closed Monday. Go to Ichon Station, line No. 4, exit 2. For details, visit www.museum.go.kr or call (02) 2077-9271.