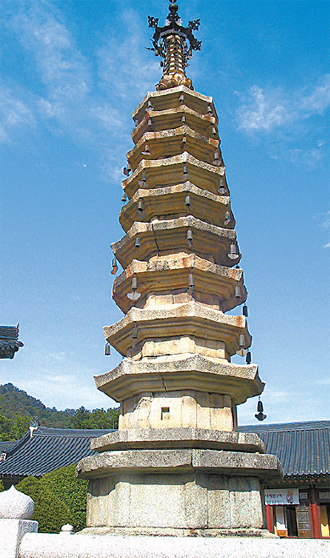 With the advent of the Goryeo Dynasty (918-1392), multi-storied polygonal pagodas came to prevail in the northern part of the nation, a departure from the previous square ones.

Jajangyulsa, a Buddhist priest, founded this pagoda at Woljeong Temple, at the foot of Odaesan Mountain.

In front of the pagoda is a seated Bodhisattva. The nine-story body, with the finial on its top, sits on a two-story foundation.

On most pagodas, the bodies grow shorter from the bottom up, but each body on this pagoda maintains almost exactly the same height beginning from the second story.

The octagonal roof stones are simply trimmed without stepped cornices. Wind bells hang from the corners of the slightly upturned eaves.

The finial, in complete condition, has two portions: a gilt bronze upper portion and a stone lower portion.

Its overall proportions and outstanding sculpturing make the pagoda a representative example of the aristocratic splendor of the Goryeo Dynasty’s Buddhist art.