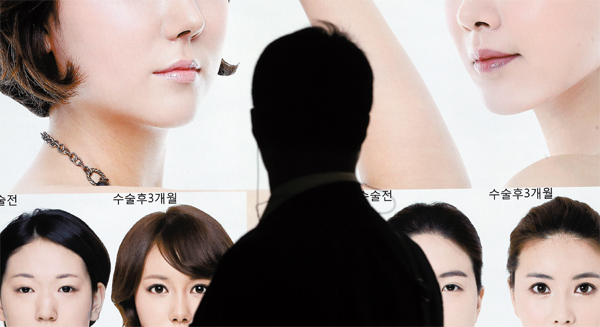 A passerby looks at an advertising for a plastic surgery clinic on a wall at Apgujeong subway station in Gangnam, southern Seoul. The FTC singled out 13 cosmetic surgery clinics for exaggerated or false claims. [JoongAng Ilbo]

More than a dozen well-known cosmetic surgery clinics have been warned about using exaggerated or false information to promote their services, as the government begins to scrutinize the costs and adverse effects of an industry for which Korea has gained international notoriety.

The Fair Trade Commission told 13 clinics, including Grand Plastic Surgery and Roman Plastic Surgery, to correct their advertising. They also were instructed to post the FTC correction orders on their websites.

The FTC warning comes as medical disputes involving plastic surgery occur at a growing pace. According to data from the International Society of Aesthetic Plastic Surgery from 2011, Korea was the world’s No. 1 country in terms of the number of plastic surgeries per 1,000 population at 13.5.

Advertisements by clinics cited by the FTC involves the results and safety of surgery. One advertisement the FTC labeled problematic said, “A one-time surgery keeps your face wrinkle-free for 10 years or longer.” Other ads used the word “guaranteed” and phrases like “100 percent safe” or “100 percent satisfaction with a second surgery.”

The FTC said Hershe Clinic in Cheongdam-dong advertised that it uses stem cells extracted from a patient in the surgery to accelerate regeneration of skin. The ad said stem cell administration will change even the color of skin for the better, but the FTC said the effect of the stem cell surgery has not been proven.

Mirae Clinic in Nonhyeon-dong said its face-lift surgery can “return the skin to the time when there were no wrinkles,” but the FTC said the surgery does not involve cutting sagging skin, so it can’t achieve the advertised outcome.

Clinic S in Sinsa-dong advertised that its autologous fat transplant surgery has the least adverse effects, but the FTC said it could be misleading as the surgery can create fat embolism.

Other ads mentioned by the FTC claimed speedy healing, saying, “You can go to work the next day after surgery” or “You will get back your youth in 30 minutes.”

Some clinics were ordered to use euiwon in their name, a label attached to hospitals run by non-specialist doctors.

“Medical advertising on the Internet is excluded from obligatory prescreening under current medical law, so people have been exposed to unfiltered, unjustified ads,” said Kim Jung-ki, a manager of the consumer safety division at FTC. “We expect this measure to be a wake-up call about the inaccurate and misleading advertisements that are permeating many medical organizations in the country.”