Renault Samsung QM3 off to a screaming start

Renault Samsung QM3 off to a screaming start 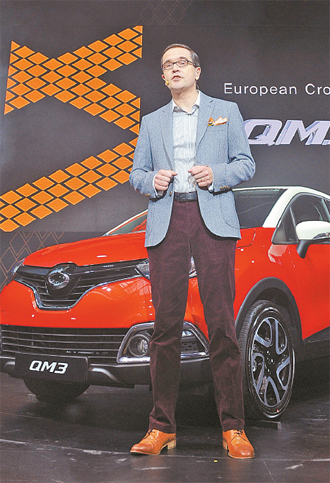 Can Renault Samsung Motors’ QM3 be the company’s savior?

Orders for RSM’s fifth new product indicate the compact sport utility vehicle could hit the jackpot for the struggling automaker plagued by slumping sales. According to RSM, the Korean unit of the French automaker Renault, more than 8,000 orders for the QM3 have come in since Nov. 20.

The company offered 1,000 units of the QM3 as a special initial sale this month, but they sold out in just seven minutes. RSM said it started delivery of the initial contracted vehicles on Dec. 3.

“We are able to introduce QM3 thanks to Renault Group, which is well aware of the importance of the Korean market,” said RSM CEO Francois Provost at the official QM3 launch ceremony Dec. 6.

Customers now might have to wait until June to receive a QM3, known as the Renault Captur in Europe. The QM3 sold in Korea is manufactured in Spain.

RSM originally planned to officially start selling the QM3 this month but postponed the date to March due to its popularity in Europe. In Europe, the QM3 was the leader in market share in the crossover utility vehicle segment from August to October, beating rivals like the Nissan Juke and BMW’s Mini Paceman.

“Our prediction for initial volume turned out to be wrong, but thankfully Renault Group told us that it will give us more cars at a good price,” said Park Dong-hoon, RSM’s vice president of sales and marketing. “We will secure enough of the QM3 production in January, so we won’t have any supply problems.”

RSM said it already applied the reduced tariff rate of the European Union-South Korea Free Trade Agreement. Under the trade pact, passenger car tariffs from EU to Korea will be lowered 1.4 percentage points to 2.6 percent from July.

In addition, RSM said the price for QM3 parts will be 85 percent of the cost of parts for the midsize SUV QM5, emphasizing that customers need not worry about high repair costs because the QM3 is an import.

“Customers should think of this as a domestic car, although it is from Spain,” said Park. “It doesn’t make sense for the company to [have] parts prices that are higher than for the SM3, SM5, SM7 and QM5. All of our QM3 customers can receive the same domestic-level service and prices at our 470 centers nationwide.”

The automaker claims the fuel efficiency of the QM3 is also attracting customers. The car gets 18.5 kilometers per liter (43.5 miles per gallon) with a 1.5-liter diesel engine from Renault and dual-clutch transmission from Germany’s Getrag.

RSM hopes the QM3 will be a main weapon in turning around sales next year, with help from new sales and marketing chief Park, a former Volkswagen Korea CEO who joined the company in September.

RSM’s sales through November were 117,604 units, 16.2 percent down from a year ago despite some gradual recovery in the second half. Last month, it sold 14,071 vehicles worldwide in its best performance of the year.

There have been rumors that Renault Group is changing RSM as a production subcontractor in the region after the company’s Busan plant was chosen to make Nissan’s next-generation Rogue SUV for the North American market and manufacture Mitsubishi-badged sedans. However, the release of QM3, first in Asia, shows Renault’s commitment to the Korean market, according to Ali Kassai, who headed the Captur project at Renault.

“Korea is a strong market that is a trendsetter in the automobile industry,” said Kassai. “We have already started increasing capacity and now we are actively considering QM3 production in Korea with the market reaction here.”