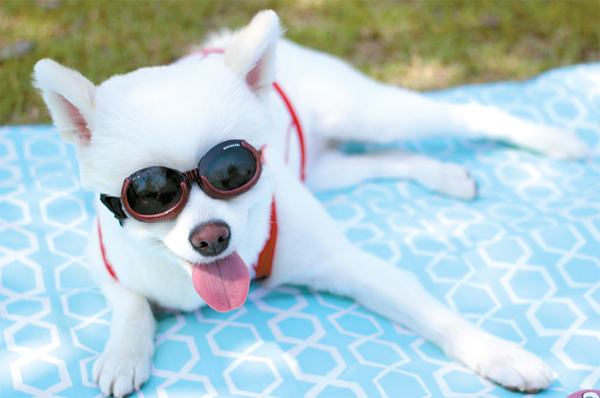 Sunglasses exclusively designed for dogs are popular among pet owners. The retail price on this imported product is 30,000 won to 40,000 won (28.30 dollar to 37.73 dollar).Provided by Style Mungmung

She buys various products, from organic pet food to thick jackets and ear covers, to prepare them for the freezing weather. This year, her shopping has gotten much easier with more foreign pet products available and more ways of buying them.

Jeong recently ordered a dog treadmill for Pongyi, who had gained weight due to lack of exercise, directly from a famous U.S. pet brand website, and a pet hair vacuum cleaner for long-haired Bori, who sheds a lot.

“Some ask me why I spend so much money on pets, or they say I love them too much,” Jeong said. “They may see my Pongyi and Bori as animals, but the two are as precious as my own family members. I’ve never thought it is a waste of money.”

As the average Korean household size has fallen due to rising numbers of senior and single-person households, family culture is becoming more westernized and many consider their animals as a part of the clan. They call themselves “pet families.”

In October, Nonghyup Economic Research Institute said 18 percent of 20 million households have a cat or dog. When including people with other kinds of pets, like a hamster or iguana, one in five Korean households appears to be a pet family.

As the number of pet owners rises, so does the amount of money they spend on their animals. The pet-product market in Korea is estimated to be 2 trillion won this year, and the Nonghyup institute projects it will triple to 6 trillion won by 2020.

“Like humans, animals also suffer from allergies and have distinct physical constitutions,” said Jung So-young, a veterinarian at Irion Veterinary Hospital’s Daechi-dong branch. “Consumer demand for customized products like handmade pet food and organic clothes is on the rise.”

Larger households of more than four persons appeared to like animal-hair vacuum cleaners that draw in light and thin animal hair better than regular vacuums. Single-person households with little time to clean also favored the fur vacuum for its strong, time-saving performance.

German home-appliance maker Miele rolled out the S8 Cat and Dog vacuum cleaner earlier this year, an update of its successful S7 model. It performs well, sucking up thin animal hairs that easily stick on clothes and carpets and features a pet-hair brush. A piece of charcoal inside the air filter absorbs pet odors. 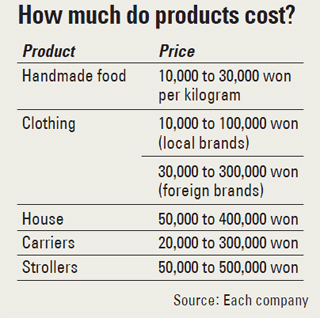 “Despite its high price tag, households of one or two-persons that typically tend to be frugal bought 27 percent of the units sold here,” said Yoon Il-sook, a marketing official of Miele Korea.

Treadmills and sunglasses for pets are also popular in the local pet community.

Doggles, an American producer of canine sunglasses, is so well known in Korea that consumers refer to all dog shades as Doggles. Most Korean pet product malls sell Doggles, which are especially good for older dogs whose eyes are sensitive to sunlight and the 5 percent of canines with cataracts. The sunglasses allow them to take a walk and play outside more comfortably.

Treadmills were developed for pet owners who have no time to take their animals outside for exercise. They are produced in various sizes for small, medium and large dogs. For big dogs, the treadmills are large and firm enough for those weighing up to 50 kilograms (110 pounds) to run on. When they get on the machine and start running, the front screen displays distance, speed and the calories consumed. Owners can adjust the speed and incline of the running board. Local consumers typically purchase them in groups from foreign brands like PetZen or order them from overseas online open markets like Amazon.com.

In a bid to help pet owners who often get bitten when drying their pets’ fur, local pet equipment manufacturer Etira started to produce dog hair dryers. Unlike regular hair dryers that blow hotter than 40 degrees Celsius (104 degrees Fahrenheit), the company lowered the temperature down to 35 to 40 degrees. The noise level is 70 decibels; much lower than regular dryers’ 85, for dogs whose auditory sense is more sensitive than humans. In an effort to assist owners who have to hold their dogs with both hands, the device can be placed on a standing dryer station.

Some foreign brands have introduced IT devices for pets. San Francisco-based start-up Whistle developed a smart leash called the Whistle Activity Monitor. All owners do is hang this leash on their pet’s neck before leaving home. A sensor automatically detects a pet’s muscle movement and transmits information, like how much it eats and walks, to the owner’s smartphone. Beyond reporting real-time information, the monitor stores information during the day to produce a statistical graph. The device retails online for $99.95. It currently operates only with iOS 6.1 or up, but the company plans to launch an Android version by spring.