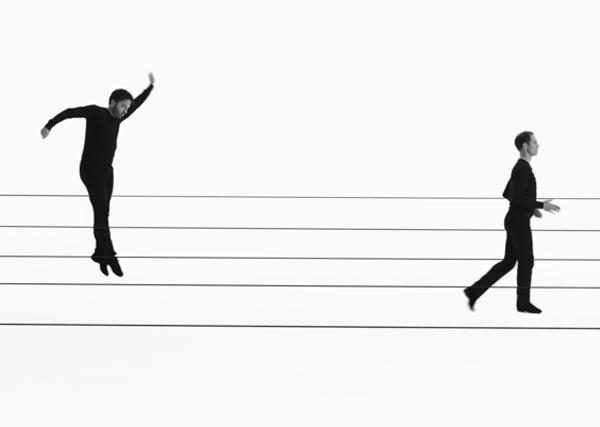 This image is from “The Flesh and the Book,” a four-channel video installation by Korean artist Jaye Rhee, now on display at Doosan Gallery Seoul near Jongno 5-ga station until Tuesday. This work shows five former dancers for the Merce Cunningham Dance Company, all in their 40s to 60s. The dancers, dressed in black, make simple but rhythmic moves between five black rubber bands installed at different heights and distances in a white space, and the effect is similar to notes hopping on a musical score. Though the performance took place in a three-dimensional space, it looks flattened and two-dimensional. The missing sense of space recovers, however, when the dancers move across the bands, and their sizes change according to their distance from the camera. Rhee said she has been always interested in the movement of the body as well as illusions. Rhee, 40, was a recipient at the second Doosan Yonkang Art Awards in 2011. Provided by the gallery