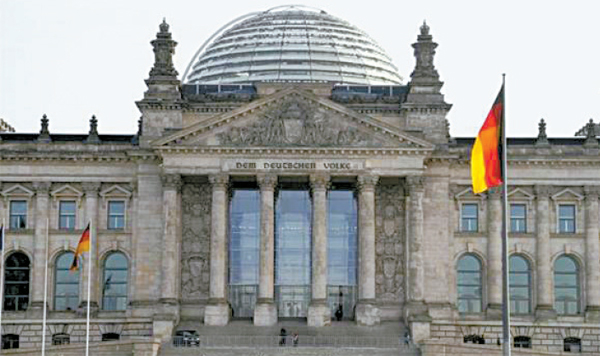 The Reichstag building, the seat of the Bundestag, the German lower house of parliament, is pictured in Berlin, on Nov. 27. [REUTERS/NEWS1]

BERLIN - An art historian has found two artworks stolen by the Nazis inside Germany’s parliament, a newspaper reported on Monday, in a new embarrassment for authorities after a huge stash of looted art came to light last month.

The Bundestag, in a statement issued after the report in Bild newspaper, said an art historian was reviewing two “suspicious cases,” but a spokesman would not confirm the find.

The art historian’s investigations into the German parliament’s art collection, which began in 2012, were continuing, the spokesman said.

“It is unclear when there will be a result to the investigations,” he said.

Last month, German authorities revealed that a trove of Nazi-looted art, valued at 1 billion euros ($1.4 billion), had been found in a Munich apartment.

That collection had been held for decades by Cornelius Gurlitt, the elderly son of an art dealer of part-Jewish descent who was ordered by Hitler to buy up so-called degenerate art and sell it to raise funds for the Nazis.

Bild newspaper said one of the two works discovered in the Bundestag collection had also originally belonged to the Gurlitt family.

Bild said the two works were an oil painting, “Chancellor Buelow speaking in the Reichstag,” by Georg Waltenberger dated 1905, and a chalk lithography titled “Street in Koenigsberg” by Lovis Corinth.

The Nazis plundered hundreds of thousands of artworks from museums and individuals across Europe. An unknown number of works is still missing and museums around the world have conducted investigations into the origins of their exhibits.

German authorities came under fire for keeping quiet for two years about the discovery of Gurlitt’s trove of 1,406 European artworks, which included works by Picasso and Matisse.

The legal status of the hoard is unclear. Gurlitt has demanded his art back and lawyers working on reclaiming property for heirs to Jewish collectors say he may get to keep at least some.

The Bundestag’s art collection comprises about 4,000 works. Bild said investigations had found some 108 pieces so far of unknown provenance.

About four years ago, it returned a portrait of former German Chancellor Otto von Bismarck to its original owners after it was found to have been stolen by the Nazis.

The Central Council of Jews in Germany called for a list of the Bundestag’s artworks to be published.