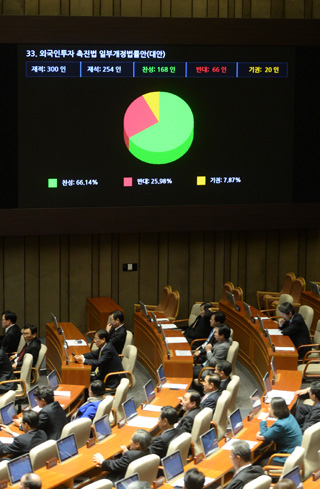 When lawmakers at the National Assembly were wrangling over the foreign investment promotion bill well after midnight on New Year’s Day, local companies had their fingers crossed, hoping that lawmakers would swiftly approve the proposal.

The bill’s passage in the morning was a small victory for conglomerates. The proposal allows second-tier subsidiaries of holding companies to establish joint ventures with foreign companies under eased regulations.

Previously under the foreign investment law, when a second-tier subsidiary of a holding company established an affiliate together with a foreign company, it was required to hold a 100 percent stake - a full investment - in the joint venture. This often hindered local companies from establishing joint ventures with foreign companies because they were required to make hefty investments on their own and assume full responsibility independent of their first-tier subsidiary.

The revised bill, however, eases that regulation and allows second-tier subsidiaries to establish an affiliate together with a foreign company holding as little as a 50 percent stake in ownership. This revision will be applied from March.

The proposal was made by the Ministry of Strategy and Finance earlier in the year as part of efforts to boost the economy by spurring investment. The opposition parties in the Assembly opposed the revised bill, arguing that it favored the interests of conglomerates.

In November, President Park Geun-hye in her administrative policy speech urged the opposition parties to consider the importance of the foreign investment bill for the country’s economy. “If the bill is passed, then there will be around 2.3 trillion won worth of investments [flowing into the country], and 14,000 new jobs will be created,” she said.

SK Global Chemical, for example, has plans to establish a 960 billion won joint venture with JX Energy, a Japanese company. GS Caltex also signed a memorandum of understanding with two Japanese firms last year to set up two respective affiliates of its own and have since conducted assessments on the joint partnership.