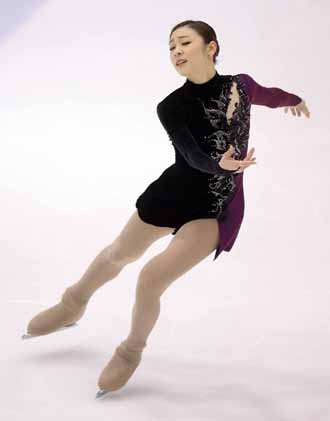 In the 68th National All-Round Championship yesterday in Goyang, northern Gyeonggi, she won the women’s senior figure skating event with a total score of 227.86 points.

The 23-year-old Kim earned 147.56 points in the free-skating program yesterday and earned 80.60 points in the short program on Saturday. Yesterday’s total score was only 0.7 points short from the 228.56 points she earned when she won the gold medal in the 2010 Vancouver Winter Olympic Games.

She made a few small mistakes on typically routine jumps while performing last month in the Golden Spin of Zagreb, her first competition of the season, held in Croatia.

She won the event with a total score of 204.49 points - 131.12 points in free skating and 73.37 points in the short program. Her stellar performance in the national championships have raised her hopes to win the 2014 Sochi Winter Olympics.

Meanwhile, over the weekend, the rink in Goyang was packed for the All-Round Championship.

About 3,300 available tickets sold out just minutes after the Korea Skating Union began its online sales.

Kim wore a black dress in the Croatia event, but she introduced a new costume this time that boasted a strip of purple on her left side.

Starting with the high-tempo tango music “Adios Nonino,” she showed off her elegance and energy, starting with a triple-lutz and triple-toe-loop jump combination, which she cleared well.

This challenging combination, the most difficult in women’s figure skating, offers the highest number of points (10.10 points).

After clearing that tricky jump combination, she followed up with a triple-lutz, a double toe-loop and double-loop jumps, showing that Korea’s defending Olympics champion is still on her game. However, she held back on the double axel, which she performed at the very end of her set, only performing one spin instead of two.

Besides a tiny mistake, she gracefully expressed the sad tone of her routine, set to a song by Argentine tango musician Astor Piazzolla.

Kim’s performance also testified to her improvement since the competition in Croatia, showing better speed and footwork.

“I feel a bit sorry for making a mistake in an easy jump [double axel],” Kim told reporters in an interview afterward. “But I am satisfied with the results I earned here. Since I already have Olympics experience from Vancouver, I will try to enjoy the Sochi event, my last competition.”

She currently holds the world record with her 78.50-point score in the short program, but because Saturday’s championship was a domestic event, it won’t be recognized in accordance with the regulations of the International Skating Union.

It was hard to find any faults in Kim’s program, who made some minor errors in her jumps in December’s competition.

Performing to “Send in the Clowns,” she cleared her first jump combination composed of a triple-lutz/triple-toe loop, which gave her a total of 12.11 points that included 2.01 points of Grade of Execution, or GOE, that is an integer from -3 to +3.

“I don’t care about the score I had because judges are generally generous in a domestic event,” Kim said after the short program. “But one good thing is that I think I had my best performance without any mistakes. This is a good sign for me.”

Kim yesterday proved that she is ready to compete in the 2014 Sochi Winter Olympics, which kicks off in February. Her jump, step and spin techniques looked sharp, and her artistic skills proved that she is back in gold-medal form.