A return to consumer-led growth

A return to consumer-led growth 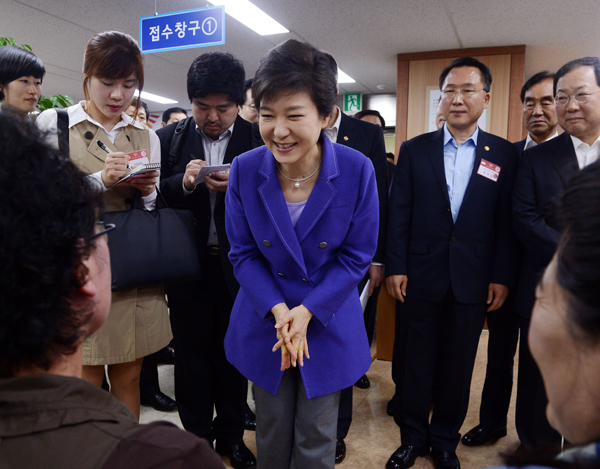 This was a noble experiment because South Korea probably has the biggest middle class of any of the more populous Asian Tigers. As a result, consumer spending led the economy in the early 2000s, but consumers got carried away: Delinquencies on credit cards reached 30 percent, restrictions were imposed, and credit-card-issuing companies had to be bailed out by the government. Household outlays fell in 2003, and real economic growth dropped sharply.

Furthermore, the attempt to shift to internal growth was no protection against the recession of 2008-9. In addition, household debt has leaped since the early 2000s. It now accounts for about 150 percent of disposable (after-tax) income. Even spendthrift Americans didn’t push their debt/DPI ratio beyond 130 percent, and it fell to 104.6 percent in the second quarter of 2013. South Korean debt, however, continues to rise.

Since the 1997-8 crisis, household debt in South Korea has grown an average of 13 percent a year, about twice as fast as gross domestic product. And much of it is in real estate, where prices have flattened. Nevertheless, more than 70 percent of that debt is owed by the top two quintiles by income, which have twice as much assets as debt. Also, regulators limit mortgage loan-to-value to 40 percent, far stricter than the nothing-down U.S. mortgages during the housing boom. And the Bank of Korea has forced some lenders to write off 40 percent of the value of personal loans, further reducing the risk of a consumer-debt-led financial bust.

Countries where per capita incomes are similar to South Korea’s have considerably lower household debt. Relative to GDP, it was 78 percent in 2008 in South Korea, compared with 40 percent to 60 percent in Eastern European countries such as Hungary, the Czech Republic and Slovakia. High debt ratios are more typical of developed countries with mature financial systems and considerable financial intermediation.

In 2010, South Korean credit card use climbed 10 percent, and in June 2011, the government announced new regulations to limit credit-card companies’ expansion along with tax incentives to encourage households to use other forms of borrowing. The inflow of foreign funds has, to a certain extent, found its way into loans to households. Muted capital investment by businesses has also redirected lending by financial institutions toward households.

The plunge in South Korea’s savings rate since the 1980s also has parallels with the U.S. Nevertheless, the drop in South Korean inflation has pushed real short-term interest rates higher, thereby encouraging saving and discouraging borrowing. Some of South Korean consumer borrowing has financed retail sales, which, until recently, were growing faster than GDP. But retailing isn’t much encouraged by the government.

Similar to Japan, large supermarkets and big-box stores can’t open without the approval of the owners of small local stores. Due to inefficiencies, South Korean grocery prices are among the world’s highest. Grocery stores can’t sell nonprescription drugs, gas stations can’t sell snacks, and drugstores are prohibited from selling candy and gum.

In March, the new government of President Park Geun-hye began a $1.3 billion fund to deal with huge consumer debt, which it considers a moral hazard. This “People’s Happiness Fund” will buy from financial institutions any loans from low-income households that are over six months delinquent and write off 70 percent of their principal. The required 93 percent write-off by financial institutions will discourage their issuance of risky loans, but the plan may encourage low-income South Koreans to run up debts and then refuse to repay them. Consumer debt grew 5 percent in 2012, and has been encouraged by property speculation and costly private education. Corporate deleveraging and government restrictions on business borrowing since the 1998 Asian crisis also has encouraged banks to lend to consumers.

Until recently, South Korea’s household borrowing has been focused on real estate investment. As with the U.S. housing market before its collapse, prices rose rapidly for a decade. And in close parallel with earlier U.S. loose lending practices, South Korean residential mortgages normally have a two- or three-year grace period at the beginning, so homeowners planned to quickly sell their appreciated properties or refinance them before any payments are due. Residential real estate accounts for 70 percent of South Korean household assets compared with 24 percent in the U.S.

Furthermore, more than 90 percent of those loans were at variable rates, and therefore subject to future central bank tightening. Indeed, the Bank of Korea cut interest rates in July 2012 in part to help indebted households. The government also has been reducing debt-to-income limits on mortgages and has encouraged borrowers to switch to fixed-rate loans. Earlier limits on commercial bank loan-to-deposit ratios, however, pushed lending to households toward nonbanking financial institutions and away from central bank control.

Temporary weakness in construction and real estate in 2011 precipitated runs on mutual savings banks, eight of which failed. Those banks, however, account for only 3 percent of total bank assets, and a special account targeted to contain 15 trillion won ($14 billion) by 2026 was set up to cover losses on their deposits after 2011.

In addition, chronic house price appreciation and investments in unsold houses encouraged overexpansion and excessive leverage among small and medium enterprises. That caused severe strain to balance sheets, to the detriment of mutual savings banks.

Nonetheless, the residential sector didn’t seem to have reached bubble proportions. Delinquency rates have been low on household and credit-card loans from banks, only 1 percent last year. Due to strict limits on loan-to-value ratios and other regulations, household real assets in 2008, at the onset of the recession, were 3.5 times South Korean household debt; in the United States they amount to just 1.4 times debt.

Also, house prices haven’t outrun rents as they did in the United States earlier, and the ratio in South Korea is now falling along with softening house prices.

Even so, the South Korean government continues to try to keep enthusiasm for housing in check. Loan-to-value and debt-to-income limits are enforced. Measures to control supply and demand also include higher taxes on housing transactions and capital gains, tightening of subsidized financing, purchases of surplus houses and support for the construction sector as well as pressure on lenders. That means house price appreciation has run between zero and the growth rate of nominal GDP in the last decade. The government has also tried to improve household balance sheets by encouraging fixed rather than variable rate mortgages.

The high levels of foreign debt owned by South Korea’s banks leave them exposed to global financial disruptions. Also, a housing collapse or other severe problems with household borrowing could cause difficulties similar to the runs on the mutual savings banks. But for the most part, South Korean banks appear to be sound, in better condition than most European and many American banks. In the second quarter of 2013, their average Tier 1 capital ratio was 11 percent, above the levels of many large U.S. banks.

Yet the return on assets tends to be below that of U.S. banks. In 2012, it was 0.54 percent, down from 0.69 percent in 2011. No South Korean bank was large enough to be among the Bank of International Settlements’ 28 Systematically Important Financial Institutions. This is the list of too-big-to-fail institutions that will be required to hold additional capital buffers of 1 percent to 2.5 percent of assets over and above the impending and higher Basel III requirements.

*The author is a Bloomberg View columnist and president of A. Gary Shilling & Co. He is the author of “The Age of Deleveraging: Investment Strategies for a Decade of Slow Growth and Deflation.” This is the second in a three-part series, and the first ran yesterday.