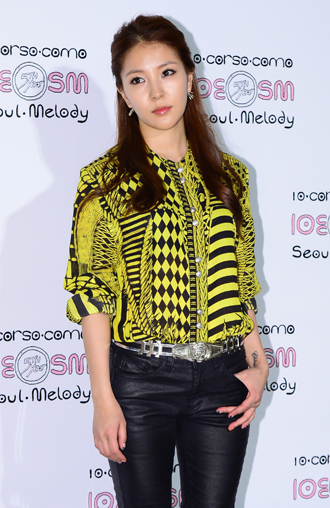 Veteran K-pop star BoA will be making a surprising appearance on the big screen next month as the star has taken a cameo role in “Law of Pleasures.”

Starring Uhn Jung-hwa and Moon So-ri, “Pleasures” is an adult comedy-drama about love and sex. It was produced by Myung Film and features a script that won the first Lotte Entertainment scenario contest.

“Although her part isn’t too much, fans can see her well-rounded acting skills,” an official related to Myung Film told local media.

BoA has said she wants to focus more on acting, and has even left her role as a judge on the SBS singing audition program “K-Pop Star3” as a result.

BoA is also starring in the Hollywood dance movie “Make Your Move,” which has been released in several countries but not Korea or the United States.

Her first major role in a Korean film will be “Big Match,” where she stars as an inscrutable woman of mystery, opposite such actors as Lee Jung-jae and Shin Ha-kyun.

“Big Match” will complete filming in the first half of this year with a release date scheduled for the end of this year.