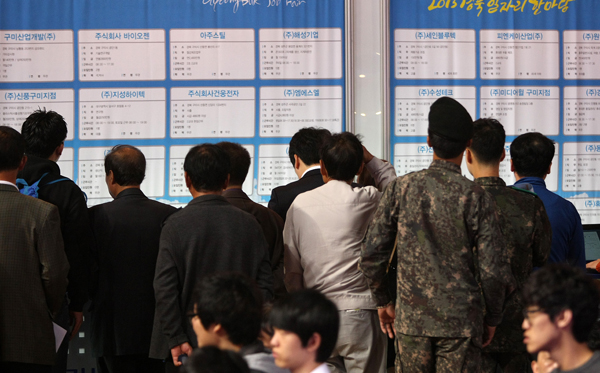 Young people check postings at a job fair in North Gyeongsang. The nation’s youth employment rate is expected to drop below 40 percent this year. [JoongAng Ilbo]

According to Statistics Korea, youth employment hit 40 percent in November after hovering around 39 percent for three consecutive months, but the rate is expected to retreat below 40 percent again this year. Young people don’t need statistics to know that their job market prospects are going from bad to worse. They agonize over a life crouched over resumes and regret their choice of college degrees as they apply for jobs.

There are various reasons behind the thinning job market for young people. The economy has been moving at a snail’s pace for years and competition is getting fiercer because of globalization. Companies are shifting operations overseas to cut costs and prefer experienced workers over fresh college graduates.

Demographics also play a part. The nation’s economically inactive population now includes more than half of its youth. A large portion - 78.7 percent - of the inactive population is still in school. Due to a surge in the 15-19 age group since 2005, students represented 43.6 percent of the youth population under the age of 30 in 2012, compared with 37.8 percent in 2005.

According to an analysis by the Organization for Economic Cooperation and Development, the youth in South Korea seek jobs only after they finish their education. Korea is generally known for a high percentage of young people going to college. But in the 25-29 age group, just 8.5 percent pursue education, lower than the OECD average of 15.8 percent. Youth employment is higher in countries where people pursue their career and studies at the same time.

The gap in supply and demand poses another problem. There are too few graduates from vocational high schools and too many with bachelor’s and postgraduate degrees. Students and parents alike prefer general high schools over vocational schools, even though graduates from the latter are in demand. Universities also fail to produces students who can quickly adapt to industrial and corporate workplaces.

Lastly, the discrepancy in social rewards also hinders growth in the youth job market. Young people all want to get into large companies because smaller ones do not offer sufficient wages and welfare packages. This is why many young educated people are without jobs - even though there are plenty of opportunities at small and midsize companies.

However, the prolonged slump in the job market is triggering some positive change. Young people are taking more of an interest in skills and technical abilities. Of applicants in license-building courses at polytechnic schools between 2005 and 2013, 41.6 percent left college or reentered after graduation.

More and more are bypassing the common path of seeking salaried jobs and starting their own businesses. New start-ups last year totaled 51,000, up 23 percent from the average five years ago. Applicants for venture competitions doubled. Many young people also are going overseas for new opportunities instead of fighting for the limited positions at home.

The youth-oriented job promotion policies the Presidential Committee on Youth Generation concocted together with various government offices are aimed to accelerate and propagate these positive changes. The package is designed to encourage the hiring of qualified workers without college degrees and push companies to increase recruitment of young people. It includes various support programs for youth start-ups. Data underscores that positive changes are under way.

Last year, the youth employment rate that had remained slightly below the 2012 level in the first eight months went north in September and increased year-on-year in the last three months. If we see to it that the new measures are well applied and sustained, we may finally see youth job figures bottom out for the first time in a decade. Youth employment cannot be combated over a short period. The government, corporate sector and society all must pay interest and support young people in finding adequate jobs that can build their careers and their future.

Young people also must look beyond and venture on.

*The author is the head of the Presidential Committee on Youth Generation and chief executive of Dasan Networks.