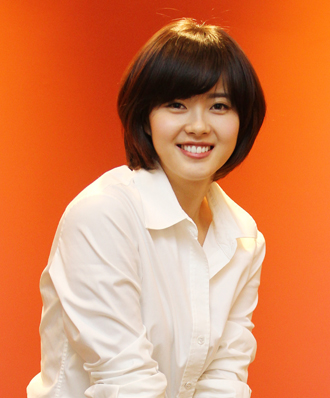 Cable channel drama “Respond, 1994” (also known as “Reply, 1994”) provided a much-needed second-chance for actress Go A-ra, allowing her to redo the prim and chic image she has been famous for since her debut in 2003.

To land her first role, on the KBS drama “Sharp” in 2003, Go had to outperform 1,000 candidates. But despite overcoming such stiff odds, Go never equalled the success of her debut, leading many to think of her as just a pretty face who makes TV commercials. Then she threw everything she had into the role of Na-jung on “Respond, 1994.” She gained seven kilograms (15.4 pounds) for the role, wore a short, unglamorous hairstyle and spoke in a thick dialect.

Having just finished the hugely successful series, Go sat down to talk with Ilgan Sports, an affiliate of the Korea JoongAng Daily.

Q. What do you think about people saying they saw a very different side of you in “Respond, 1994”?

A. I’m regretful that I could have been better as Na-jung at first. But I think the director and production team made my character well. I want to do another comic and fun character. In fact, that is more like the real me, and I finally got to present that side of me to audiences. Before, when I ate doenjang jjigae [bean paste soup] or sundaeguk [soup made with blood sausage] at a restaurant, people would look at me as if wondering why I was eating such food. But now people accept the image more naturally. I think my life got easier.

Why did you gain weight and change your look for this role?

Even before filming started, the director told me to gain weight. It was my idea to change the hairstyle because after I read the script I thought long hair didn’t go well with the character. To show the cheerfulness of Na-jung, I tried a rougher cut to make it short. I was a little surprised when it got shorter than I wanted because I never had short hair before, not even bangs.

Were you unhappy with the cold and chic image you used to have?

Because I was raised in the countryside, I didn’t know that I had that image. Then one day, I started to feel that everyone was looking at me like I’m a doll when filming.

The director told me that I need to look more down to earth and asked if I could stuff my face with food, fart or have a crazy romance. The director knew fairly well who I really am because he met me when I just started acting. I said hello to everyone because I was a new actress, and he said he remembered me bowing deeply to him in the elevator.

Do the actresses at your agency, SM Entertainment, like Lee Yeon-hee and Im Yoon-a, help each other with their acting skills?

Although I’m close with them, we don’t have much time to talk about each other’s work as we are all busy. Nowadays there are many actors and actresses at SM Entertainment. I think sooner or later it will be known as a powerhouse for managing actors and actresses.

Has your ankle healed since getting injured during filming?

I injured the same spot that was injured when I was filming the movie “Pacemaker.” This time, though, I totally broke a ligament, so I need to get surgery. I’m going to take a rest for some time and think about my next project.

You are still close to your cast members?

The cast still talks to each other through smartphone messengers. When tired, we all look at each other with eyes half-asleep and console each other. We all cried as if we were a family on the last day of filming.