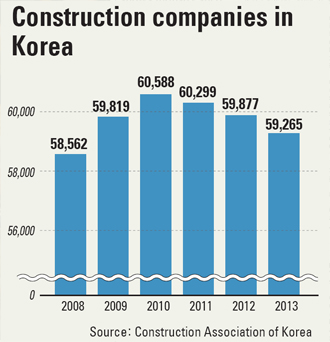 Korea lost 612 construction companies last year as builders continued to be squeezed by a stubborn slump in the domestic market, according to data from the Construction Association of Korea.

After the government eased the construction business licensing system in 1999, the number of companies grew steadily, peaking in 2010 at 60,588. However, following the slump in the real estate market and fierce competition, more companies went out of business, according to the association.

While major builders have been finding work overseas, small and midsize builders have been suffering at home with decreasing orders. The data showed the cumulative value of domestic orders issued in the first 11 months of 2013 was 76.95 trillion won ($72.3 billion), down 15.2 percent from the previous year.

By business, civil engineering companies suffered the most, with 700 closing in the past five years, while only 258 construction companies have shut down. The association said the 2012 expansion of areas in which contractors can operate has slowed the decline.

However, the association said the number of companies that had to shut down because of bankruptcy declined 25.7 percent year-on-year to 156 in 2013. The association credited the government’s restructuring program, including debt workouts and court receiverships depending on a company’s credit rating, with effectively intervening before companies are left with no choice except to declare bankruptcy.

Despite the decreased number of companies, the construction association said the number of construction workers has increased slightly due to larger work forces necessary for some major projects. As of November, there were 1.79 million people working in the construction industry, up 1 percent from 1.77 million in 2012.

The Korea Chamber of Commerce and Industry says the domestic construction industry will get a boost from eased regulations, such as those related to remodeling apartments.