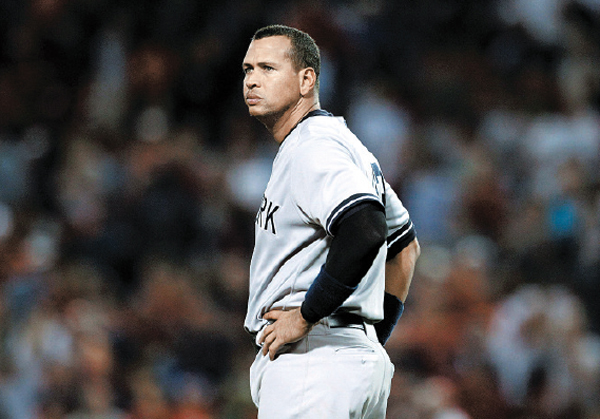 Alex Rodriguez of the New York Yankees will miss the 2014 Major League Baseball season and playoffs after an independent arbitrator on Saturday rejected the All-Star third baseman’s appeal. [REUTERS/NEWS1]

Alex Rodriguez was dealt the most severe punishment in the history of Major League Baseball’s doping agreement when an arbitrator suspended the New York Yankees third baseman for the entire 2014 season.

The decision by arbitrator Fredric Horowitz, announced on Saturday, cut the suspension issued in August by MLB Commissioner Bud Selig from 211 games to this year’s entire 162-game regular-season schedule plus any postseason games. The three-time American League Most Valuable Player will lose just over $22 million of his $25 million salary.

Rodriguez vowed to continue his fight in federal court to reverse the decision.

“It’s virtually impossible. The arbitration will stand. I think it’s almost inconceivable that a federal court would overturn it,” said former Commissioner Fay Vincent, a graduate of Yale Law School. “The arbitration is itself an appeal of the commissioner’s judgment. How many appeals do you go?”

Rodriguez is the most high-profile player to be implicated by MLB’s doping rules, following the league’s investigation of the Biogenesis of America anti-aging clinic, which was accused of distributing banned performance-enhancing drugs.

His punishment was “for attempting to cover up his violations of the program by engaging in a course of conduct intended to obstruct and frustrate the office of the commissioner’s investigation.”

A 14-time All-Star, Rodriguez has been MLB’s highest-paid player under a $275 million, 10-year contract. He will be 39 years old when he is eligible to return to the field in 2015. He is signed with the Yankees through 2017.

Rodriguez admitted five years ago he doped while with Texas from 2001-03, but has denied using banned drugs since. He already sued MLB and Selig in October, claiming they are engaged in a “witch hunt” against him.

“The number of games sadly comes as no surprise, as the deck has been stacked against me from day one,” Rodriguez said in a statement. “This is one man’s decision, that was not put before a fair and impartial jury, does not involve me having failed a single drug test, is at odds with the facts and is inconsistent with the terms of the Joint Drug Agreement and the Basic Agreement, and relies on testimony and documents that would never have been allowed in any court in the United States because they are false and wholly unreliable.”

The Major League Baseball Players Association had filed a grievance last summer saying the discipline was without “just cause.”

Horowitz, a California-based lawyer, heard the case over 12 sessions from Sept. 30 to Nov. 21.

In Rodriguez’s only partial victory, Horowitz ruled he is entitled to about 11.5 percent of his salary this year, a person familiar with the decision said, speaking on condition of anonymity because the decision was not made public.