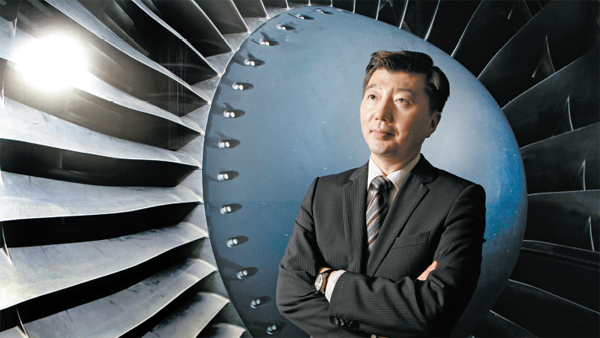 Khang Sung-wook posing in front of an airplane turbine image at the headquarters of GE Korea in Cheongdam-dong, southern Seoul. By Park Sang-moon

Last week, Khang Sung-wook, president and chief executive of General Electric Korea, flew to Florida to attend the 2014 GE Global Leadership Meeting in Boca Raton. Along with about 600 executives from around the world, top management officials discussed GE’s vision and business strategy for the new year.

The overall mood of the three-day meeting was pleasant, according to a GE Korea spokeswoman, which to some extent was a reflection of the slowly recovering U.S. economy. According to an analysis by the company’s Global Market Intelligence Team in mid-December, economic conditions in 2014 “are projected to turn positive,” with the U.S. economy gaining strength, although some variables remain. The team also gave a positive outlook for European economies, with the United Kingdom leading the way.

According to GE Korea, much of the focus at the meeting was on Korea, one of 160 countries where GE, the world’s largest infrastructure company, has operations. GE, which traces its roots to Thomas Edison’s Edison Electric Light Company in 1878, is involved in a variety of sectors, including energy management, power and water, oil and gas, transportation and capital.

GE Korea is currently engaged in a broad range of businesses, and the company operates manufacturing and research and development facilities like its Healthcare IT center in Songdo, Incheon.

Khang became head of GE Korea in January 2012 after many years at other foreign companies in Korea.

Korea is on the radar of GE headquarters even more since an October visit to Seoul by Chairman Jeffrey Immelt, who met with President Park Geun-hye. 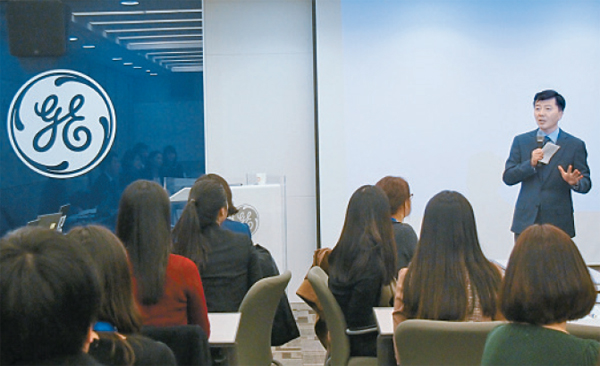 “Korea isn’t a country with big domestic consumption,” Khang said in an interview with the Korea JoongAng Daily several days before he left for Florida. “The country also doesn’t have many natural resources.”

However, what it does have for companies like GE is “unique capability.”

And based on that capability, GE opened the head office of its Global Offshore and Marine business in Busan on Oct. 23. The decision was made by Immelt after efforts by Khang to persuade other executives that the office needed to be in Korea.

According to Khang, when he tried to sell Korea to top GE executives, he stressed that the global company will be able to target other markets together with Korea.

“I thought it would be important that we utilize Korea’s capability in businesses that we [GE] can also relate to,” he said.

Last fall’s opening of the office was the realization of his goal.

The shipbuilding and offshore facilities industry is where Korea stands out. The country’s three top shipbuilders - Hyundai Heavy Industries, Samsung Heavy Industries and Daewoo Shipbuilding and Marine Engineering - account for about 70 percent of the global market. Khang thought GE could accomplish something with these leaders.

“Collaboration will be made in a number of ways with each of the companies,” he said. “For example, GE can provide solutions for a particular product or part, or develop technologies together with them.”

During his meeting with President Park, Immelt also reportedly discussed ways to cooperate further in offshore plant and shipbuilding and in fields such as health care and aviation. Cooperation can be done with not only large Korean companies but also small and midsize enterprises, which matches up well with Park’s initiative to promote economic democratization.

Khang said the current recession in the global shipbuilding industry is something “we need not worry” about because ups and downs are “cyclical.”

“There will be a period when the industry booms again when the time comes,” he said. The offshore and marine sector “is newly rising as a lucrative market that’s insulated from economic headwinds.”

Every year, there is new demand for offshore facilities, which are known as floating plants that help drill oil from deep seabeds. Ten to 20 orders are made globally each year, according to Khang, with each order worth about $2 billion.

Far left: GE Chairman and CEO Jeffrey Immelt, right, and GE Korea CEO Khang Sung-wook hold a press conference in Seoul in October. GE opened its Global Offshore and Marine head office in Busan, underscoring the strategic importance of Korea to GE as a growth partner. Left: Khang, left, takes a look at the company’s Dynamic Positioning system at its booth at the International Marine, Shipbuilding and Offshore Exhibition that was held last fall in Busan. Provided by the company

“What we’re interested in is developing resources in deeper seas, known as the subsea business,” he said.

Khang also cited the health care sector as an area where GE can improve its partnership with Korea.

“Korea has outstanding health care technologies supported by its IT capability, and much attention is drawn to the health care industry,” Khang said.

GE signed a memorandum of understanding with the Ministry of Trade, Industry and Energy in December to build an R&D center for digital mammography, which is essential for early diagnosis of breast cancer, and acquired a small medical business that owns related technology.

The current extensive partnership GE has established with Korea didn’t come out of nowhere.

GE and Korea have shared a special long-term relationship: A GE lamp was the first electric lamp lit in Gyeongbok Palace in 1887.

GE Korea launched in 1976 and has since partnered with Korean companies in sectors such as offshore and marine, power and water, aviation and health care.

For future ties in business areas, Khang said he’s interested in resource development, aerospace and finance, in which he will be looking for more opportunities to work with small Korean businesses.

When Immelt and Park met last year, they reportedly discussed offshore plant and shipbuilding, health care and aviation as areas of possible cooperation.

This year, Khang seems determined to maintain the passion he has shown as the CEO for GE Korea and for the company’s success in Korea.

“The year 2012 for me was one that involved much learning and finding out about things I didn’t know, and there were also trials and errors,” Khang said. “In addition to that, the following year was dedicated to persuading top management [in GE about the importance of the Korean market] and asking for their interest.”

The 53-year-old believes this year will be one where many of the investments that began last year start to yield results.

“What investors expect is a return of their investments,” Khang said. “And I’m responsible [for realizing that].”

Khang has a bachelor’s degree in economics from Seoul National University and a master’s from Sloan School of Management at the Massachusetts Institute of Technology.

As for his business philosophy, Khang said he does not take risks on things he isn’t fully able to predict their consequences. Otherwise, he said he welcomes challenges. 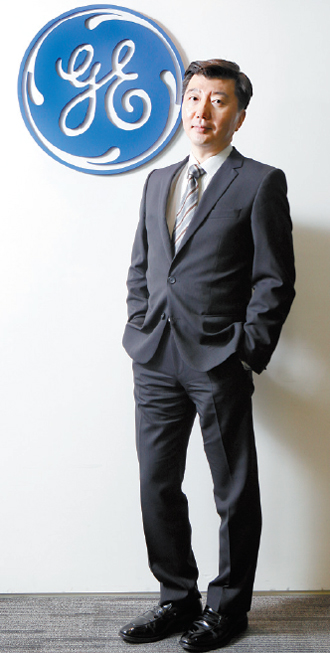