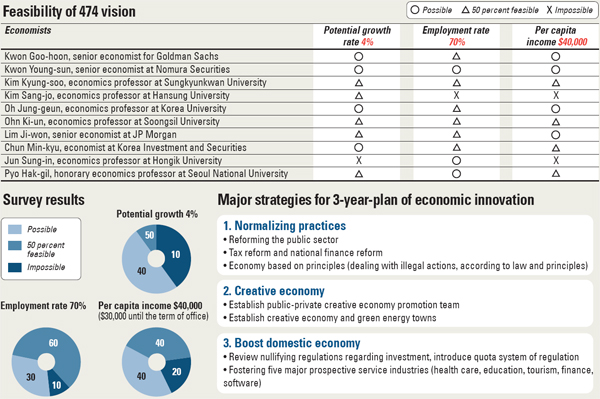 Is it a realistic goal or a pie in the sky? Ten economists respond to the feasibility of the 474 vision - 4 percent GDP growth, 70 percent employment and $40,000 per capita income - proposed by President Park Geun-hye as part of her 3-year economic innovation plan.

So-called Geun-hyenomics has changed its direction from economic democratization to economic revitalization in its second year. However, fewer than half of the surveyed economists were confident all three goals can be achieved at once.

“Although the government’s direction is right, there are many variables in achieving the goals,” said Pyo Hak-gil, honorary economics professor at Seoul National University. “Instead of adhering to the number 474, the government should roll out policies that could approach those levels.”

“We should never hurry,” said Kim Kyung-soo, economics professor at Sungkyunkwan University. “We need to learn from the case in which the household debt soared during the Lee Myung-bak administration, as the government forcibly pushed the 747 goal, 7 percent economic growth, $40,000 per capita income and becoming the world’s seventh-largest economy.”

At the moment, many economists agree that reaching 4 percent growth will not be easy for an economy currently expanding at a rate of 3.5 percent, which has been sluggish for five years. The Korea Development Institute forecast that growth will maintain at a 3 percent level and decline to 2 percent by 2020 and 1 percent in 2030.

To reverse this trend, the global economic recovery - upon which Korea is dependent - must be sustained.

“Just like the shale gas revolution in the U.S., there needs to be a revolution in productivity. However, no such moves are seen in the creative economy policy to achieve the 4 percent goal,” he said.

Economists including Kwon Young-sun at Nomura Securities, said the $40,000 per capita income or $30,000 within the term of office will likely come along once the growth rate reaches 4 percent.

The variable is the currency rate.

“If the won weakens due to the Federal Reserve’s tapering, the situation will become more difficult,” said Kim Sang-jo, economics professor at Hansung University.

As for employment, where Korea has fared better than many countries, raising the rate to 70 percent remains challenging, said many economists. In 2012, the employment rate was 64.2 percent. In order to raise that to 70 percent, an additional 2.38 million jobs are required, but only 380,000 new positions were created last year.

The government aims to add 450,000 jobs this year. To achieve the 70 percent employment goal, the government would have to create 520,000 new jobs each year.

“The quality of jobs is as important as employment rate,” said Jun Sung-in, an economics professor at Hongik University. “The government should not raise the current employment rate by increasing non-regular jobs.”

“The 474 is an associated goal that cannot be separated,” said Chun Min-kyu, an economist at Korea Investment and Securities. “Increasing quality jobs will boost consumption and investment in businesses, which will then revitalize the domestic economy and create growth.”