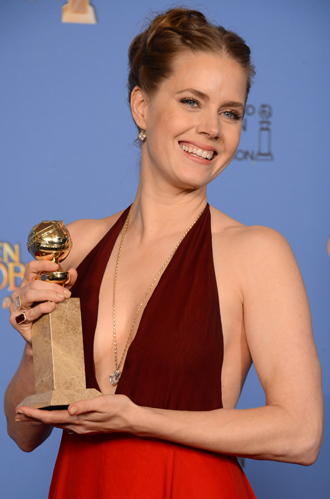 Amy Adams with her Golden Globe award for best actress in a comedy or musical for “American Hustle.” [AP/NEWSIS]

Amy Poehler made out with Bono, Tina Fey mocked George Clooney’s taste in women and Matt Damon emerged, bizarrely, as the night’s theme.

But at the end of a madcap Golden Globes (Fey toasted it as “the beautiful mess we hoped it would be”), the major honors soberly ended up with the favorites. David O. Russell’s con-artist caper “American Hustle” led with three awards, including best film comedy. And despite missing out in the other six categories it was nominated in, the unflinching historical drama “12 Years a Slave” concluded the night as best film drama.

“A little bit in shock,” said director Steve McQueen, before shrugging the lyrics to the old gospel song sung in the slavery epic: “Roll, Jordan, roll.”

Russell’s 1970s Abscam fictionalization “American Hustle” had the better night overall, winning acting awards for Amy Adams (best actress drama) and Jennifer Lawrence (best supporting actress). Best picture was the only award for “12 Years a Slave,” which came in with seven nominations, tied for the most with “American Hustle.”

Awards were otherwise spread around.

Matthew McConaughey took best actor in a drama for his performance in the Texas HIV drama “Dallas Buyers Club.” Leonardo DiCaprio, a nine-time Golden Globe nominee, won his second Globe for best actor in a comedy for his work in “The Wolf of Wall Street.”

The pair came out with a spree of punch lines, dishing them around the Beverly Hills Hilton, much to the delight of its starry audience. Damon, Meryl Streep and, naturally, George Clooney were among the targets. Fey particularly had the crowd roaring with a description of “Gravity,” which stars Sandra Bullock and Clooney.

“George Clooney would rather float away in space and die than spend one more minute with a woman his own age,” said Fey.

Many of the night’s surprise winners were literally caught speechless. Andy Samberg (best actor in a comedy series, “Brooklyn Nine-Nine”), Elisabeth Moss (winner of best actress, miniseries or movie, for “Top of the Lake”), Robin Wright (best actress in a TV series, drama) and even Poehler, herself (best actress in a TV series, comedy), appeared particularly shocked to win and each stumbled through their thank you’s. Poehler celebrated by making out with Bono.

Spike Jonze was also blindsided by his best screenplay win for his futuristic romance “Her.”

“I’m a terrible public speaker,” said Jonze. “And I’m bad at English. And it’s the only language I know.”

Four months after its final episode, AMC’s “Breaking Bad” won for best drama TV series and best actor in a drama series for Bryan Cranston (both their first Globes). Cranston called his honor “a lovely way to say goodbye.” Creator Vince Gilligan said the award gave him “one more chance to thank the fans of the show,” but left the final word for star Aaron Paul.

U2 and Danger Mouse won the award for best original song for “Ordinary Love,” recorded for the Nelson Mandela biopic “Mandela: Long Walk to Freedom.” Bono said working on the film completed a decades-long journey with Mandela, having played an anti-apartheid concert some 35 years ago.

“This man turned our life upside down, right-side up,” said Bono of the South African leader who died in December. “A man who refused to hate not because he didn’t have rage or anger or those things, but that he thought love would do a better job.”

Accepting the Globe for best supporting actor, Jared Leto also paid tribute to his inspiration. The actor, whose rock band took him away from movies for years before the part, won for playing a transsexual in “Dallas Buyers Club.”

“To the Rayons of the world, thanks for the inspiration,” said Leto.

As expected, the Emmy-winning HBO film “Behind the Candelabra,” the acclaimed Liberace drama directed by Steven Soderbergh, won for best movie or miniseries, as well as best actor in a TV film for Michael Douglas. He thanked his co-star Damon.

“The only reason you’re not here is I had more sequins,” Douglas told Damon. (Earlier in the evening, Poehler said among such a famous crowd that Damon was “basically a garbage person.”)

The telecast managed two expletives in its first 30 minutes, one from Moss, the other from Jacqueline Bisset (best supporting actress, miniseries or movie, “Dancing on the Edge”). Both were surprise winners.

But the playful interplay of Fey and Poehler again stole the show in the early going. The “SNL” duo, signed up to host next year, too, brought last year’s Globes’ telecast to a six-year ratings high of 19.7 million. AP