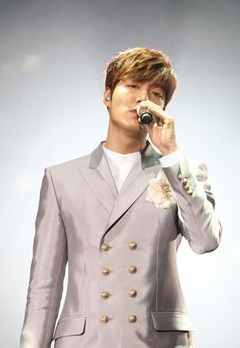 With just days before filming gets under way for “Gangnam Blues,” actor Lee Min-ho entertained local fans at his “My Everything” meet-and-greet concert on Saturday.

The show, which took place at Olympic Park in southern Seoul, came complete with crooning by the heartthrob and even a special segment in which Lee picked out his ideal girl from among the fans and presented her with a necklace.

The show ended Lee’s six-nation tour that kicked off in May. Over the course of eight months, Lee met about 5,000 fans through the shows.

The 26-year-old actor who rose to fame through the hit drama “Boys Over Flowers” in 2009 has had much success with dramas in his career. Last year, he starred in another popular drama, “The Heirs,” alongside model-actor Kim Woo-bin and actress Park Shin-hye.