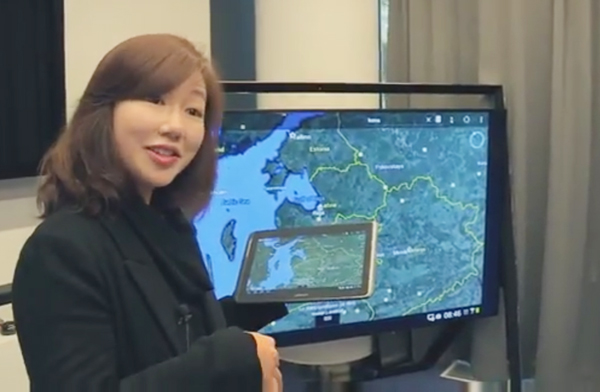 Choi Young-ha, a Samsung Electronics manager, is captured in this video introducing the company to students in Latvia.

Choi Young-ha, a Samsung Electronics manager, says she always yearned for life as a professional in an exotic country, but her yearlong mission as a regional expert in Latvia has been challenging.

Choi’s story of trying to overcome the language barrier in the Baltic country and her loneliness because of the absence of her 1-year-old daughter and husband is the subject of a short documentary video on Samsung Group’s website.

The group yesterday launched “Zoom in Samsung,” a series of films about the lives and work of Samsung employees to “get closer to the people,” the group said in a statement. “We want to show Samsung as it is and communicate with the public more intimately.”

The five-minute clip about Choi features Samsung’s regional experts training system, which has seen about 5,000 participants in 80 countries since it was established in 1990. Under the program, participants are expected to connect with local populations to expand Samsung’s human network, the video explains.

The program, launched in July, aims to train students with humanities, social studies or business majors in software for six months to foster “convergence talent.” Graduates of the program are hired in software divisions at Samsung’s IT affiliates, such as Samsung Electronics and Samsung SDS. A total of 188 students graduated in the program’s first class last month.

In the video, Kim says he spent a “second adolescence” at college, anguishing over such questions as, “Why am I alive?” Now, Kim is excited about starting his career in a new area that would have been unthinkable without the Samsung Convergence Software Academy.

Many other participants in the inaugural program also are interviewed in the video, and one of them says Samsung “seems to want to work with people with absurd ideas.”