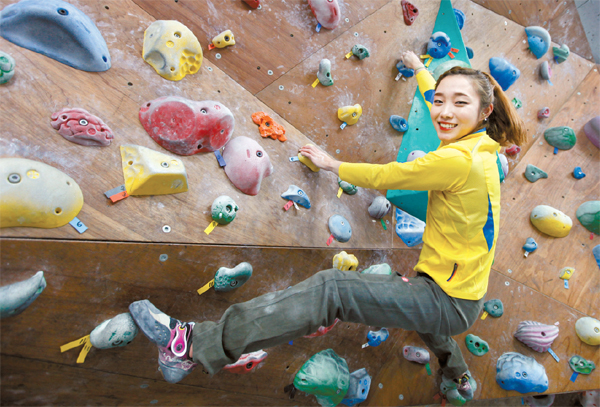 Kim Ja-in, 25, demonstrates her climbing skills at her gym in Sinsa-dong, southern Seoul, on Dec. 13. By Park Sang-moon

Sport climbing is a form of rock climbing that relies on permanent anchors and bolts fixed to the rock for protection. It’s not a familiar sport to many people because it requires extreme endurance, strength and flexibility.

But the sport isn’t unfamiliar to Kim Ja-in, 25, the female world champion who has won four gold medals at the Lead Climbing World Cup, hosted by the International Federation of Sport Climbing. In the most recent event held in Slovenia in December, she finished in fourth place, but that was good enough to regain her No. 1 world ranking and beat her biggest rival, Mina Markovic, 27, of Slovenia.

Kim had a rough start this past season because she injured her knee in April. She didn’t compete in the bouldering events, in which a climber can’t use ropes or harnesses, and focused instead on the lead climbing events, which involve reaching as high up as possible with a rope on a predetermined 15-meter-high route (49.2 feet) in a given time period.

After undergoing rehab, Kim won the lead climbing event in July, held in Valence, France, which was her season debut. Afterward she won the Belgium world cup event and the Russia event in September. She also took second place in two world cup events, one of which was held in Mokpo and the other in China. Kim then won another world cup in France in November. In December, cable network MBN named her its top female athlete of 2013.

The Korea JoongAng Daily interviewed the world champion at her gym in Sinsa-dong, southern Seoul, on Dec. 13. Here are some excerpts:

Q. Congratulations on regaining the No. 1 world ranking for the first time in three years. How do you feel about that?

A. It feels great. I had some tough years after the 2010 season, but I think my efforts paid off. But the best thing is that I was able to finish each event without any problems. My primary goal in every event is actually completing each course - not winning - because it is kind of challenging to me. I sometimes feel pressure being the world No. 1 because once a person achieves such a thing, they are just known for the number and no one thinks about what it took to make that happen.

You said you tried to enjoy what you like [climbing] and that made you be the world’s best climber when you were honored by a local cable network last month.

That is true. I grew up in a family that loves mountains and climbing. My mother was also a mountaineer and my eldest brother, Ja-ha, later became my coach and my second brother, Ja-bi, was my training partner. I think I’m lucky to be a part of this family because I started climbing mountains because that was what my mother and brothers used to do on the weekends and it naturally led me to this sport. Because I’m doing what I like most as a career, I don’t have regrets.

Because you compete in such a tough sport, people think you are like an “iron woman.” What do you think about that?

Well, I don’t think about images that much, but like you said, it seems like people sometimes think I’m a strong person who can easily be the world No. 1 because I have done it before. What I want to say is that there is no easy thing to accomplish in any type of work, especially when you are competing with people from around the world. But I think the most important thing is that I have to challenge myself and try to overcome everything I face. Because sport climbing is an individual sport, I can’t rely on anyone, particularly in the middle of a competition, and I have to keep encouraging myself to overcome any problems.

You also climbed high-rise buildings last year. Don’t you feel any fear? Why do you do that?

[In July, Kim climbed the 28-story, 128-meter-high KNN Tower in Busan. She donated 1 million won for every 10 meters to charity. In October, she climbed the 84.6-meter-high Lotte Department Store building in Myeong-dong, central Seoul, in 27 minutes.]

It is a part of my effort to show that sport climbing is a fun and safe thing to do. People always get scared because they are afraid of falling from a high place, but without safety tools even I wouldn’t be able to do that.

Many people try to lose weight in many different ways, but I think mountain climbing is one of the best ways to do that. And because you can learn sport climbing at an indoor facility before you go practice outdoors, people don’t have to be afraid.

When was the happiest moment in your career?

Many people think it should be when I first became the world No. 1 in 2010, but I think it was when I finished 2012’s International Sport Climbing Championship in second place in the lead climbing event.

I had a slump after I lost my world No. 1 ranking and had some minor injuries, but my brother helped me a lot in training and coached me well.

During the slump, I wasn’t afraid that I possibly couldn’t complete a course, so I made it happen. My brother and I hugged each other and cried for a long time when I finished the course.

What do you do in the offseason?

I enjoy going to a good restaurant with my friends. I sometimes travel a long distance to eat some famous dishes. I pretty much eat everything. I love meats, salads and even sweet things, including chocolates [laughs].

What is your goal for this season?

I have the same goal every year. I want to complete every course I climb safely. I think I’m ready to enjoy another season and to keep my world No. 1 ranking for sure.