Most descendants are unaware kin have been enshrined

Most descendants are unaware kin have been enshrined 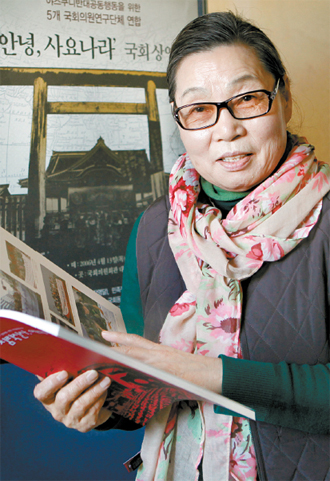 Lee Hee-ja, whose father is one of 20,000 Koreans enshrined at the controversial Yasukuni Shrine in Tokyo, began looking for her father in 1989. Her pursuit of his whereabouts bore fruit only eight years later.

When she found out that her father was kept as a “divinity” at the war shrine, along with others who died for the Japanese emperor, she was indignant. She had heard of Yasukuni through news headlines, but she never imagined that her father would be enshrined there.

That is why Lee, the co-president of the Korean Council for Redress and Repatriations for the Victims of World War II Atrocities, understands better than anyone else how the descendants of those enshrined at Yasukuni feel when they learn that their family members are at the shrine.

“The first reaction is always disbelief,” she said. “They just simply cannot believe it.”

Here are excerpts from the Korea JoongAng Daily’s interview with her, held on Jan. 12 at the office of the council in Dongdaemun District, eastern Seoul.

Q. How did you find out that your father was at Yasukuni?

A. In 1997, I learned that the National Archives of Korea had a list of Koreans who were forcibly mobilized by the Japanese that it obtained from Japan in 1993. I learned of my father’s death through the list. And there was a stamp in my father’s record in Japanese, which I learned only later, which indicated that he was enshrined at Yasukuni. And I got a record from Yasukuni that verifies that my father’s name is indeed on the roster of the shrine.

Is that how most descendants find out?

Many of them find out when we notify them [as we prepare our lawsuits]. It’s because most people don’t even know that there is such a list at the National Archives of Korea to begin with. Even if they learn about it somehow, they don’t know how to obtain it. This is why our council is mainly focused on finding records and compiling them. But the biggest problem of all is that there is no government-level movement to notify the descendants of those who are enshrined at Yasukuni.

With the Japanese government becoming more conservative recently, what do you think are the prospects for removing the names from the shrine?

We are well aware of the prospects being low. But that doesn’t mean we should stop. Even if it is “hitting the rock with an egg,” we will keep doing it.

Also, I don’t think there was no progress at all for all these years. Last week, we - the lawyers and the descendants - met with Representative Yoo Ki-hong of the main opposition Democratic Party, a member of a special parliamentary committee against the distortion of Northeast Asian history. Yoo promised his support and there may likely be a symposium, hopefully involving Taiwan as well [whose people are also enshrined at Yasukuni] on the issue within this year.