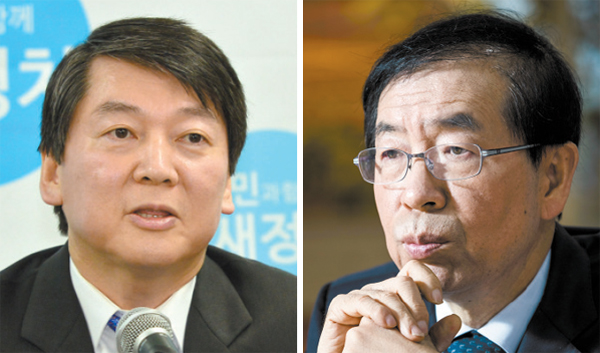 Maverick lawmaker Ahn Cheol-soo denied rumors yesterday that he is considering running for Seoul mayor in June - challenging sitting Mayor Park Won-soon, whom Ahn was instrumental in getting elected two years ago.

“I never talked about it [running for the Seoul city office] or even thought about it,” Ahn said yesterday in response to questions regarding an alleged mayoral bid.

“I am creating a new party to present a new type of politics to the people,” he told reporters outside his office in Yeouido, western Seoul. “If I get elected as a local government head, I will not be able to realize that goal.”

To run for local office to be a city mayor, Ahn would be obliged to vacate his Assembly seat 20 days before election day under the law.

Speculation about Ahn running for mayor was sparked by a report in the JoongAng Ilbo yesterday.

The paper reported that Yoon Yeo-joon, a co-chairman of Ahn’s new political group and a veteran political strategist, told Ahn that he should think about running for the job if his New Politics Promotion Committee fails to find a candidate strong enough to challenge Park Won-soon.

“We have to contend with the Democratic Party in the local elections with the fate of our political careers at stake,” Yoon was quoted as saying to Ahn by the paper.

Park has announced he’ll run for re-election for the Democratic Party.

Political aides to Ahn denied the report and said no such conversation had occurred between Ahn and Yoon.

“The two never had that conversation,” said independent lawmaker Song Ho-chang, a confidant of Ahn. “I don’t know how that report came about. Yoon and Ahn both said they never talked about Ahn running for Seoul office.”

In a follow-up phone interview with the JoongAng Ilbo, however, Yoon left open the possibility of Ahn running for mayor.

“We will try hard to recruit potential candidates in the next four months for the election,” he said. “On Ahn’s running as a candidate, we have to wait and see how the electoral situation evolves.”

Aides to Mayor Park were cautious about the rumors, saying they had no comment after Ahn denied the report. But some expressed discontent with Ahn’s remark earlier this week that it was his turn to receive concessions from the DP.

“Politics is not a trade for money,” said a city official, who asked not to be identified. “What does he mean by receiving concessions this time? Ahn damaged his own reputation [of being a new kind of politician] by that remark.”

If the former software mogul turned first-term lawmaker decides to run for Seoul mayor, it will put incumbent Mayor Park in a very difficult position. Park was elected in a 2011 by-election largely because Ahn yielded the mayoral candidacy to him and gave him his support. At the time, Ahn had overwhelmingly positive approval ratings among voters in Seoul.

Park Soo-hyun, spokesman of the opposition Democratic Party, said, “If Ahn decides to run in the mayoral election, it will be a telling sign that his party has failed to find competent candidates.”

Meanwhile, Kim Han-gill, chairman of the DP, is scheduled to meet with Ahn Friday. The two are expected to talk about presenting a united front against the Saenuri Party in the June local elections amid growing questions over how the DP and Ahn’s political group will work together to avoid splitting the liberal base.