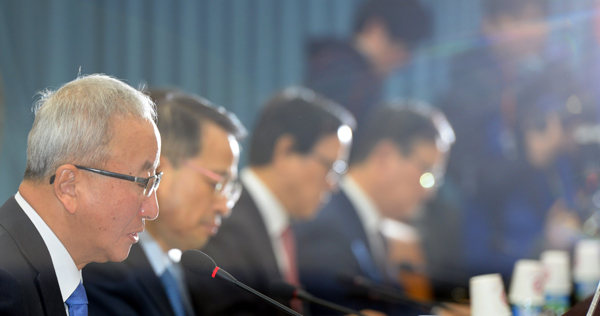 Finance Minister Hyun Oh-seok yesterday said he did not intend to blame the public for massive leaks of personal financial information.

During remarks at a ministerial meeting on Wednesday, Hyun said the public should have been more cautious.

At another meeting yesterday, Hyun said he was only trying to point out a “wrongful practice” that leaves more than 95 percent of people obtaining credit cards and opening other financial accounts without knowing how their personal information is handled, according to the Ministry of Strategy and Finance.

More than 100 million financial accounts - affecting more than 40 percent of the Korean population - were affected by what is seen as the country’s worst private information security breach, according to the financial authorities.

The leaks began at three credit card companies - KB Kookmin Card, Lotte Card and NH Card - and caused a nationwide panic, forcing Shin Je-yoon, the chairman of the Financial Services Commission, to make an apologetic bow on Wednesday as he announced the government’s response.

Kim Jung-hoon, head of the National Policy Committee of the National Assembly, received another apology from Shin and Choi Su-hyun, governor of the Financial Supervisory Service, during a hearing yesterday, saying financial authorities should be held accountable for the leaks due to mismanagement.

Shin, Choi and the heads of the three card companies were at the hearing.

But Hyun appeared less inclined to shoulder blame - at least, that was a perception by the political circle of him.

Another remark by Hyun - “a foolish person talks about responsibility for whatever happens” - also created a stir.

Lee Hye-hoon, a supreme council member of the ruling Saenuri Party, said: “It is the kind of remark that makes the listener doubt his ears. It is an arrogant remark with which he is disregarding the public.”

Jun Byung-hun, floor leader of the opposition Democratic Party, said, “Hyun is turning on the public although he is in the wrong. “It is like the world view of a Cyclops.”

Yesterday, the finance minister issued a statement saying he was sorry for “causing concern to the public, although I did not intend it.”

“The government sees the case very gravely,” he said, according to the ministry.

“We will thoroughly investigate the case … hold those in the wrong responsible and implement the preventive measures announced yesterday speedily so that the public feels safe in doing financial transactions soon.”

Koh Seung-beom, secretary-general of the FSC, held a news briefing on the leaks yesterday, saying the measures announced Wednesday are “guidelines” and that a task force run by the FSC will come up with comprehensive measures next month to prevent information leakage.