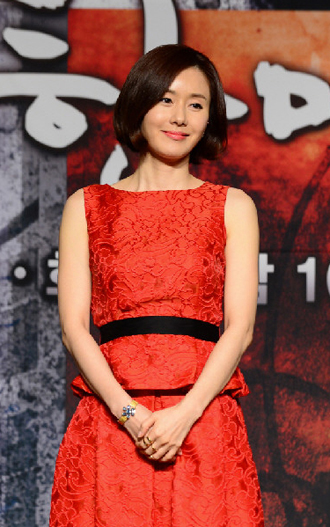 Actress Kim Ji-soo has been turning heads with her recent portrayal of a wife who discovers her husband has been cheating on her in the SBS drama “One Warm Word.”

The drama, rather than focusing on how the infidelity started and continued, looks at the pain suffered by the rest of the family.

Kim, who plays betrayed wife Mi-gyeong, rages, sobs and collapses to express her anger. Kim talked about the drama with the Ilgan Sports, an affiliate of the Korea JoongAng Daily, in a recent interview in Gangnam, southern Seoul.

Q. How hard was it to play your character

A. Mi-gyeong endured the infidelity of her husband at the start of the drama. I was exhausted early on because I had to sob and collapse in the first episode when I found the photo that proved the infidelity. I think I’ve gotten better at handling the emotion as I’ve gotten more absorbed in the character. The scenes are not so easy, so filming makes me a bit tired. I had to lie down on the sofa for about 30 minutes [one time]. Sometimes, my hands shake as my blood pressure rises. But, interestingly, I feel some sort of catharsis after such moments.

Do you think you would act just like Mi-gyeong?

I talked to the director a lot about it. Mi-gyeong is curious about the woman her husband is cheating on her with and even goes to the same cooking class as her. I don’t think I could ever face that woman. After all, Mi-gyeong is in pain because she can’t stop her imagination.

Did you like the scene where you stared fiercely at your sleeping husband one night and woke him up?

Don’t you think you would get annoyed to see your husband sound asleep after what he did? It is sad and funny at the same time that I pushed a pillow on his face, tried to hold myself together and then messed with my hair. I finished filming the scene without making any mistakes, and as soon as they said “cut” the whole crew burst into laughter.

Mi-gyeong now talks back to her mother-in-law. She is becoming more straightforward at expressing her feelings. Some viewers want to feel the more thrilling moments [as I get tougher].

You play a lot of characters who are in unfortunate situations. Do those characters affect your personal life?

I don’t think work imposes any impact on my personal life or my marriage. I have already felt many things by being around my single and married friends. I don’t think whether I’m married or not decides if I’m happy with my life. Of course, I used to think that I needed to get married when I was younger, but not nowadays.

Do you talk to fellow cast members about relationships?

As I mostly film with Ji Jin-hee, we sometimes talk. We discuss how each sex deals with infidelity in marriage. I also talked to the director and I see a difference in opinions. The director said, from a man’s point of view, that Mi-gyeong’s actions may be sort of obsessive. I responded by saying that her actions are not obsessive because it is natural for women to act that way and that obsession comes with love.

When did you stop worrying about not being married?

It’s been about three years. There was no major turning point, but the idea came to me naturally because I experience many things while I live my life. I do wish that I had my soulmate, but I don’t think that should necessarily mean marriage.