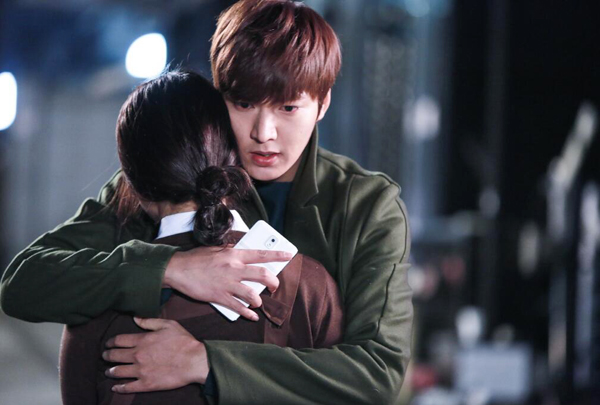 A scene from the drama “The Heirs.” Provided by SBS

“Get out of my house! No? Want to continue going to Jeguk High School? Then love me as much as possible.”

This is a line from the Korean drama “The Heirs,” which successfully ended its run last December. “The Heirs” follows a love story between the son of a business tycoon and an ordinary girl. In the drama, high school senior Cha Eun-sang (actress Park Shin-hye) lives with her mother, who works as a housemaid in the Jeguk Group chairman’s house. The mother and daughter eventually start living in the maid’s room, but Cha keeps working various part-time jobs, including washing dishes and delivering fried chicken. Then a love story between the chairman’s second son (actor Lee Min-ho) and Eun-sang blossoms.

The recently finished SBS drama was highly praised and the cast included some of the best actors in 2013. The main actors, Park and Lee, got the best couple award, and Lee received the best male actor award at the SBS Drama Awards.

Like most dramas, “The Heirs” can be characterized as having a “Cinderella complex,” with a helpless female character who waits for her prince to rescue her, just like in the fairy tale. In dramas, this element works with two people - a poor and incapable heroine and a handsome, rich hero. Since 1994, many Korean dramas have included this element and it has become an essential part to a successful drama.

Cinderella dramas are loved by many people in various countries, and each country tries to sell their copyrights abroad. The popularity rating of a drama is influenced by the audience. Most of the viewers are women, according to the Korea Creative Content Agency, and the value of Cinderella dramas is increasing because women of all age limit enjoy the dramas.

Cinderella dramas are loved by many because every drama has its own special element, even if it’s formulaic. For example, the drama “Lovers in Paris” (2004) included a secret behind birth, “Secret Garden” (2010) had a fantasy of two people switching bodies and “The Secret” (2013) included a hit-and-run. Drama-loving viewers sometimes complain about simple and obvious endings, but they enjoy watching Cinderella dramas because new shows are constantly appearing.

“South Korea is made up of social divisions nowadays and the potential for success is limited, unlike in the past,” Hwang said.

“An individual’s blood-and-tears endeavors cannot change their social class, and that is why they think they need to marry rich, young individuals from financial conglomerates. The TV audiences know this, but they relieve their stress by visual sensation.”