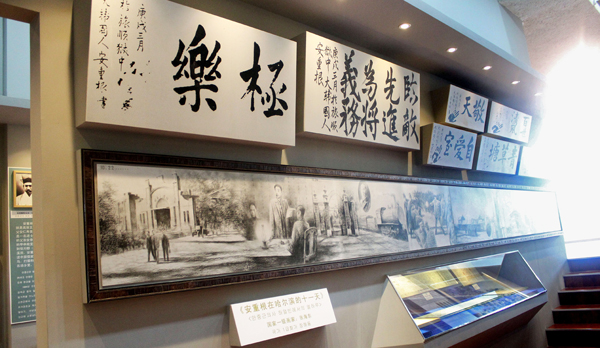 Ahn Jung-geun is a Korean. His calligraphy says so. However, the independence fighter was not just any Korean, but a person of the world. He embodied peace and liberty, the grand causes of humanity, with his own death. That’s what I felt after visiting the Ahn Jung-geun Memorial in Harbin, China, on Jan. 21. Every Chinese person I met there - regardless of gender and age, and some foreigners - felt the same.

The only exception would be the Abe government, which refuses to repent and face its country’s history. On Jan. 20, Japanese Chief Cabinet Secretary Yoshihide Suga called Ahn Jung-geun a “terrorist.” He needs to learn what “terrorist” means. English dictionaries define it as “a person who uses violence, especially murder and bombing, in order to achieve political aims.”

Suga claims that Ahn assassinated former Japanese Prime Minister Hirobumi Ito for a mere political aim. But a rebuttal can be found in the memorial. The 110 items exhibited there represent that the purpose of Ahn’s courageous act was to assassinate the cruel war of aggression by imperial Japan that brought bloodshed in Asia, and that he was seeking peace for humanity.

Chinese authorities put the title, “The Founder of Peace in Asia” under a portrait of Ahn and stated that the purpose of the “assassination” was to bring peace. There is a lot of evidence to support this statement. Before his execution, Ahn was imprisoned at Lushun Prison and requested a postponement of his death as he wished to complete his essay on peace in East Asia. However, imperial Japan declined the request and displayed savagery by carrying out the killing of Ahn.

In the documentation center, records show that many Japanese officials were impressed by Ahn’s farsighted philosophy of peace and wished to obtain his calligraphy. It shows that even Japan has acknowledged that the purpose of Ahn’s heroic action had no personal political intention.

Has any terrorist ever had any desire to write about peace for humanity? Abe and his ministers must visit the Ahn memorial. They need to see the exhibits for themselves and decide whether to call him a terrorist or a martyr. Committing suicide for a grand cause is supposed to represent the samurai spirit in Japanese culture, isn’t it?

*The author is the Beijing bureau chief of the JoongAng Ilbo