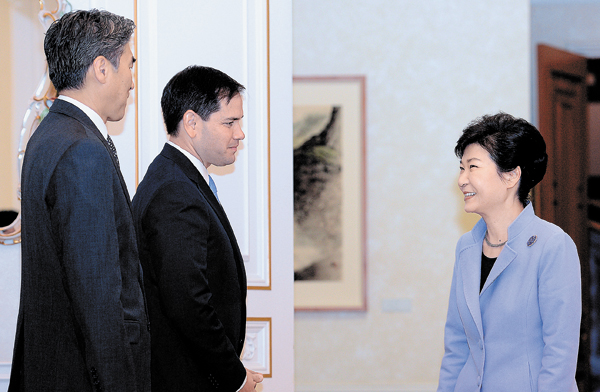 President Park Geun-hye said she was skeptical about North Korea’s recent conciliatory proposals, including the offer to hold reunions for separated families, saying such peaceful gestures were always a prelude to an attack on South Korea.

U.S. Senator Marco Rubio, a member of the Senate Foreign Relations Committee and the Sub-committee on East Asian and Pacific Affairs, met with Park on Saturday at the Blue House in Seoul. The meeting was part of a trip to the region to better understand North Korean affairs and other diplomatic issues in Northeast Asia.

“Given our previous experiences, such conciliatory propaganda [by North Korea] has always been followed by provocation,” Park told Rubio, according to transcripts released by the Blue House. “Their words were always inconsistent with their actions.

“Now it is the time for them to prove [their sincerity] not by words but by actions.”

The letter, carried by the North’s official Korean Central News Agency and featured on the front page of the Rodong Sinmun, was a follow-up to similar proposals made on Jan. 16.

The statement made last week demanded that Seoul cancel the annual military drills with the United States that run between February and April and urged both sides to halt the “slander and insults” against each other starting Jan. 30, the first day of Korea’s Lunar New Year holidays.

South Korea dismissed the offer at the time, casting doubts on the sincerity of the proposal. It also said that the matter of the family reunions should be carried out regardless of the political situation.

“If North Korea indeed wants peace on the Korean Peninsula, they should come forward to resolve the matter of its nuclear weapons program, the biggest hurdle for peace on the Korean Peninsula,” Park told Rubio on Saturday. “North Korea is becoming increasingly unpredictable, and the two allies [South Korea and the United States] should closely cooperate to maintain tightened security.”

The South Korean government is planning to send a reply to North Korea’s letter soon, a source told the JoongAng Ilbo, to propose holding family reunions in mid-February, before Pyongyang changes its mind.

The Korea-U.S. joint military exercises are scheduled for early March, and the South Korean government will soon be sending official notifications to China and North Korea about the drills, the source said.

However, a military official told the JoongAng Ilbo that U.S. aircraft and strategic bombers would not be participating in the coming drills.

“Last year, we mobilized bombers for the drills due to the highest military tensions raised by North Korea,” the military official said. “But this year’s situation is not so tense as to bring the bombers.”

Despite South Korea’s explanation that the annual exercises are just for self-defense, Pyongyang denounced them and called them a hostile act against the regime.