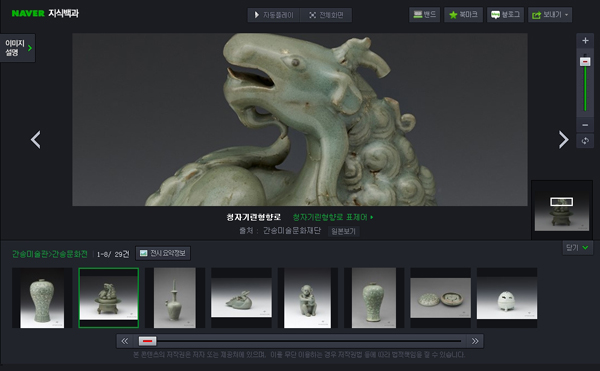 The Kansong Art Museum, one of Korea’s most important private museums, is showing a part of its collection online, the first time the secretive museum has officially done so. [Screen capture]

The Kansong Art Museum, established in 1938, is best known for two things: its priceless collection of Korean art and antiquities - many of them state treasures - and its notoriously closed and old-fashioned way of doing business.

For one thing, the Kansong holds just two fortnight-long exhibitions each year, one in the spring and one in the fall, making the institution a quite secretive and mysterious place for many.

But now everyone can enjoy a part of Kansong’s priceless collection anytime and anywhere. The museum opened an online gallery Monday, displaying 29 of its artifacts in a high-resolution slide show.

Although others have put works presumed to be from the Kansong collection online before, the latest move marks the first time the museum itself is providing the information.

The Kansong is thought to have about 5,000 items in its collection, including 12 national treasures and eight treasures, although the figure has never been confirmed by the museum.

It also displays Kansong’s extremely rare copy of the Hunminjeongeum, or “The Proper Sounds for the Instruction of the People,” National Treasure No. 70 - the document that announced the creation of hangul, Korea’s original script, in 1446.

“We hope that through our joint project with Naver, more and more people will get to enjoy Kansong’s collections, realize the excellence of our art and culture, and feel pride,” said Chun In-keon, the chief administrative officer of the Kansong Art and Culture Foundation.

This gallery is likely just the start of a bigger project.

Kim Hwa-jeong, the publicist for Kansong C&D, which handles the foundation’s marketing and PR, says that the foundation is planning two more online exhibitions on Naver.

One display will look at the 85 exhibitions the museum has held since 1971. Another will be an online rendition of the Kansong exhibition slated to be held at the Dongdaemun Design Plaza in March.

The 80-artifact exhibition at the Design Plaza will be the first time the Kansong Art Museum has showcased its collection outside of its old and outdated venue.

“Should things work out well with Naver, we hope to continue to hold more online exhibitions in the future,” Kim said. The publicist said she was unsure if Kansong’s huge collection would ever be entirely online, but they are trying to make as much of it available as possible.

The Kansong Art Museum, Korea’s first private museum, was built by legendary art collector Jeon Hyeong-pil (1906-62), who was known for using his wealth to buy Korean relics so that they would not be bought by Japanese or other foreigners and taken outside the country.

Kansong’s twice-yearly exhibitions were once frequented mostly by students or scholars of Korean art. But in recent years, they have grown immensely popular, attracting tens of thousands of visitors a day, prompting critics to call for a change in the museum’s operations.