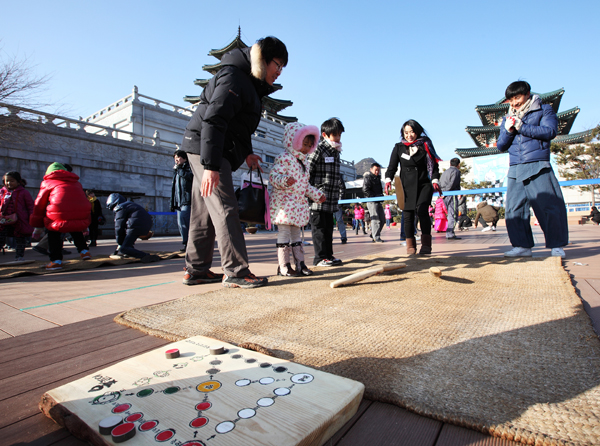 Visitors to the National Folk Museum of Korea play yutnori, a traditional Korean board game. Provided by the museum, [JoongAng Ilbo]

The Lunar New Year holidays, or Seollal in Korean, kick off today. And while Seollal means a time for family and tradition, it also brings a wealth of activities where you can learn about and participate in Korean culture.

Those who are brave enough to fight the cold weather can venture outdoors to museums, concerts, restaurants, and even ski resorts to experience some traditional games and other rituals they don’t get to do everyday.

For Koreans who want to experience how their ancestors spent the Lunar New Year, many museums have prepared all-inclusive experiences. Some of the events even provide free traditional food and beverages.

The National Folk Museum of Korea, located in Gyeongbok Palace in central Seoul, is offering 40 programs in its Seollal Grand Festival, so that locals won’t miss out on a chance to celebrate the beginning of the new year.

Several sets of hanbok, a traditional Korean garments, are available for free to be used for photo shoots. Visitors can also have their fortunes read - a custom that Koreans have done for centuries - for free.

Those who want a souvenir to bring back home can ask a calligrapher to write down some wishful words on paper. You can also make bokjumeoni, a small basket that is believed to contain good luck for the year, until Sunday for 3,000 won ($2.77).

To celebrate the Year of the Horse, the museum is providing an equestrian experience as well. Visitors will be able to ride a pony in the museum’s front yard, plus take photos. Other traditional games, including yutnori, a traditional Korean board game, will also be available.

If your stomach starts to growl after all of these activities, grab some sikhye (a rice drink), yugwa and yakgwa (types of sweetened snacks), or some other rice cakes. They’re free, but the menu is set to change daily.

The National Museum of Korea, which is in Seoul’s Yongsan District, will have its 2014 New Year’s Festival on Saturday. The festival will start with an outdoor performance of traditional musical instruments, including buk, or drums, and dancers will wear tiger masks and use other props while celebrating the coming of the new year. At the end of the dance, visitors can hold hands with the performers and dance in a large circle.

In the afternoon, a play inside the museum, “A Chat with an Ultimate Aficionado,” tells the story of how several daughters-in-law become part of one family. “It will give a chance to younger and older generations to think again about what the Lunar New Year holiday is all about as they may have different ideas about it,” the museum said. Due to limited seating, anyone wants to attend should go to theateryong.or.kr to reserve a seat.

Top: Younger visitors can ride a pony to celebrate the Year of the Horse. Second from top: Children walk on bamboo stilts, a popular game in ancient Korea. Third from top: People wearing hanbok play a giant version of yutnori. Above: You can have a calligrapher write words of good wishes on banners. Provided by the museum, [JoongAng Ilbo]

If you’ve been wanting to participate in some cultural activities but hesitated to do so because of high ticket prices, this weekend will be the perfect time for you to venture out to theaters and concerts. The period musical “The Moon Embracing the Sun,” inspired by the fictional TV drama of the same title, will be available at 60 percent off the original ticket prices tomorrow at the Seoul Arts Center.

For anyone seeking to make their musical experience more memorable, cast members from the musical “Hero” will give out autographs after their afternoon performance starting at 3 p.m. today and tomorrow at the lobby of the arts center’s Opera Theater. Also, when families of three or more wear hanbok to Belini, a restaurant at the arts center, they will get a free pizza.

If pizza doesn’t appeal to you, go to Samcheonggak, where you can have some traditional Korean food and tea while enjoying some performances. Jami, the cultural venue’s regular lunch spot, has a special menu and a performance list until Monday. The restaurant in Seongbuk-dong, northern Seoul, will have a different program every day and today’s lunch, starting at 11 a.m., will be accompanied by the concert “Arirang Flower,” which will include minyo, or Korean traditional folk songs.

The last special performance will be on Monday with Kang Eun-il, an expert player of the haegeum, a traditional stringed instrument.

Visitors to the Sejong Center for the Performing Arts, in southern Seoul, will have a chance to write their names with a traditional brush on paper. Also, a royal chair used by former Korean kings in the hall “The Story of King Sejong” is available for those who want to sit down and take some photos.

Theme parks are open, too

If you have children to look after and you want to show them how national holidays can be full of fun experiences, local amusement parks will be able to satiate your desire.

Everland in Yongin, Gyeonggi, is hosting a New Year’s Festival in which visitors can watch some traditional performances and play outdoor games until Sunday.

Major attractions will include drum performances, as the amusement park decided to add a modern twist to traditional drumming. In the fusion drum performance to be offered indoors twice a day at the Grand Stage, performers will pound on a large drum with a flaming stick.

For those who don’t fear the subzero weather, the park has also prepared nine popular traditional games, including kicking jegi (a pouch that usually has small coins). Whoever kicks the jegi for the longest time without having it touch the ground is the winner.

Foreign residents in Korea can get a 50 percent discount upon entering the park when they present their alien registration card. Up to four people, including three Korean nationals, can enter with foreign residents and receive the same discounted price until Feb. 9.

Until Sunday, Lotte World, in southeastern Seoul, is hosting an event that resembles the ball drop at midnight on New Year’s Eve at Times Square in New York. Here, a large ball is hung high off the ground, but it breaks by itself to welcome the new year. Traditional fan dances and other music performances are also part of the festivities.

From modern to traditional

Those who want to participate in winter sports while still enjoying traditional activities can kill two birds with one stone. Many local ski resorts are offering traditional games so that skiers and snowboarders can have another sort of thrill off the slopes.

Residents of Gangwon can play yutnori, one of the most popular games during Seollal, at Hi One Resort. Oak Valley, also in Gangwon, will have its outdoor Traditional Games Festival tomorrow and Saturday so that families can compete with one another. Those who visit over the weekend can fly kites as well.

At the Konjiam Resort in Gyeonggi, families can collect a stamp each time they win a traditional game at the resort until Saturday, and those stamps will give them a chance to win a voucher for a ski lift, or to other entertainment facilities there.

For people who want to spend most of their holiday at a resort, Phoenix Park in Gangwon will prepare charye, a ritual that is performed on the morning of New Year’s Day as people bow to their ancestors, pay tribute to them with food and fruits and wish for well-being throughout the year. The table full of food will be provided for free so that visitors can commemorate their ancestors in a group, and even share food with one another after they pay tribute.

Lastly, a famous folk tale, “Heungbu and Nolbu,” will be recreated underwater at the COEX Aquarium in Gangnam District, southern Seoul, until Sunday. It will be adapted for divers so that they can present coordinated moves with more than 20,000 fish.