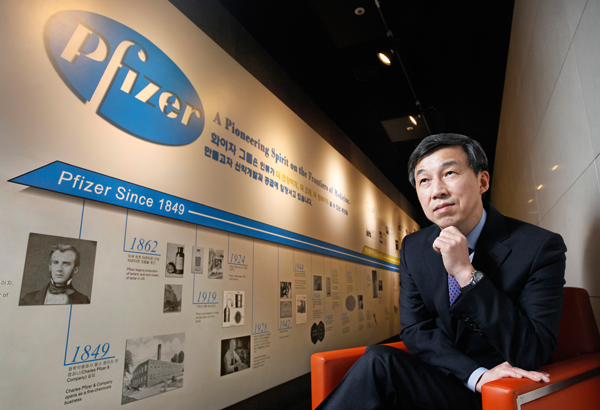 Lee Dong-soo, representative director and country manager of Pfizer Korea, is a firm believer that hard work always pays off.

Having joined the local unit of the world’s largest pharmaceutical company in 1998 as assistant medical director, after an earlier career as a family physician, not a single day has passed without Lee making some kind of progress.

And, learning from Lee, the 751 employees of Pfizer Korea are known for their hard work, energy, perseverance and agility - qualities that have been noticed by the company’s global headquarters.

“It’s for sure that Korea is viewed differently by [the headquarters in New York],” Lee said in a recent interview with the Korea JoongAng Daily at his office in Myeong-dong, central Seoul. “[Koreans] don’t like being sloppy and they try their best to complete what they have started in the first place. They have the perseverance to achieve [their goals] with high-quality work until they’re satisfied.”

Based on the hard work of the employees at Pfizer Korea, Lee was awarded a Presidential Award by the Ministry of Health and Welfare last year for his contribution to Korea’s pharmaceutical industry. Earlier this year, Lee was recognized for his performance and leadership. As a result he was given an additional role by the New York-based headquarters; taking charge of the Global Innovative Pharma (GIP), one of the operational segments at Pfizer in Taiwan. He was also given a second term to continue to manage Pfizer Korea’s operations, which he has been overseeing since May 2009. 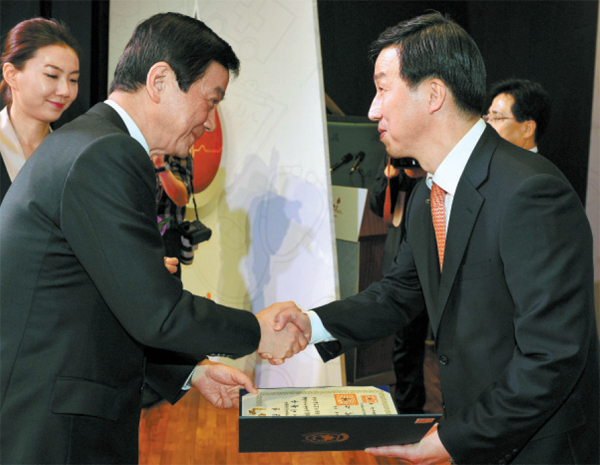 Q. There was a rearrangement of Pfizer Korea’s operations recently. What was behind the change?

A. Following an organization reshuffle at the global headquarters, the operations of Pfizer Korea also shifted to being categorized by major business segments from January. (Before, Pfizer Korea’s operations were categorized by different business units.) We hope to provide more efficiently the value of Pfizer’s medicine and medical supplies to patients and parties concerned, especially at a time when there is rapid change in the pharmaceutical environment. Ultimately, the move is one step further to Pfizer’s goals and vision, which are to develop medical treatments based on innovation that improves the lives of patients and to contribute to living healthier lives.

The GIP division will focus more on drugs and pipeline [of products in development] that are included in the treatment territory with exclusive market dominance based on patents even after 2015. The GEP division will look after products in which patents have already ended or are expected to end before late 2015.

Is Pfizer at a critical stage with many patents expiring?

The overall environment of the pharmaceutical market is changing. And in response to the changes, Pfizer is putting out efforts in four major areas, which are also called the four imperatives. They are: [1] to fix our innovative core and generate medicine that profoundly impacts health; [2] to maintain sustainability and to maximize value and enhance returns; [3] to earn greater respect from society; and [4] to create an ownership culture.

To further explain these four imperatives, the first one is to reorganize the R&D model and system so that we are able to develop innovative new drugs. This would involve the concept of “open innovation.” In the past, the whole process [of developing new drugs] was done within the company from A to Z, from discovery to commercialization.

In recent years, however, we have been selecting treatment areas we’re good at to concentrate on those, and we have also been cooperating with other bio ventures, pharmaceutical companies and hospitals to boost productivity of R&D. This has led us to enhance our new products and pipeline. If we look at the pharmaceutical market today, it is no longer a time when things are done alone. As for the fourth imperative, the core asset in a company is people and we try hard to enhance employees’ ownership sensibility.

Recently, many executives like yourself have been given responsibilities in other global markets. What significance does this have?

With the recent reshuffle, many executives at Pfizer Korea, including myself, have been placed in global markets as leaders. There were cases in the past in which Korean executives were chosen to work in overseas markets, but it is considered rare for so many executives to be placed in global markets. Working for a Korean subsidiary of a global company means that [employees] are able to utilize the experience and opportunities of a global firm. Pfizer is a global company that has entered the Korean market so it’s necessary that a global [company] understands Korea and Korea understands the world. We call that “glocalization.”

I believe that for a global firm to succeed in Korea, one of the most important principles is to understand the country and contribute as a member of Korean society. Pfizer Korea is strong for having many talented employees with unique perseverance, initiative and a winning spirit that enables them to actively deal with a changing environment and moments of crisis. The reason Korean executives were sent to global markets is based on these strengths and it shows the headquarters has recognized the business performance and capability [Koreans have].

It’s significant that the recent reshuffle has raised the status of Korea in the global market. We expect Korean talents to continue to play an active role, and Pfizer Korea will put our efforts into providing support to nurture global leaders.

Around 100 volunteers from Pfizer Korea, left, including executives and employees, pose after launching the Happiness for Grandparent-Grandchildren (GPGC) Families campaign; Volunteers participate in the fourth Pfizer Dream Camp, center, which is a key program of the Happiness for Grandparent-Grandchildren Families campaign; Lee Dong-soo poses, right, after signing an MOU for clinical trial cooperation with four hospitals in Korea. Provided by the company

It is for sure that Korea is viewed differently .?.?. [Koreans] don’t like being sloppy and try their best to complete what they have started. They have the perseverance to achieve [their goals] with high-quality work until they’re satisfied. For example, in 2007 we tried to persuade the headquarters to sign a memorandum of understanding for R&D investment with the Health Ministry. We made it, and this showed the performance of Pfizer’s R&D leadership and also a “can-do spirit.” I remember we discussed with the headquarters day and night how important [the R&D MOU] is for Pfizer and Pfizer Korea’s future and the significance it has in Korean society.

For the past five years what efforts have you made for the development of Korea’s pharmaceutical industry?

The global market share of Korea’s clinical tests is growing every year. Korea’s R&D capability has also reached a global level and it also has an outstanding infrastructure. As to Korea’s rapid growth in R&D, I believe contributions and efforts by Pfizer Korea were huge. Based on an innovative R&D leadership, we contributed to improving the level of the domestic clinical test sector and in establishing a relationship with the government as a trust partner and other local research development institutions and interested parties.

Also, as a business citizen, we believe it is important to contribute to the development of the local society as much as developing innovative drugs. We are at the forefront of actively providing various social contributions in the industry, which allow the development of Korea’s regional society and the creation of a healthy world. We were noted for this, and in 2013 we received the Presidential Award at the 41st World Health Day Ceremony organized by the Ministry of Health and Welfare.

How do you foresee the future of Korea’s pharmaceutical industry?

You are a doctor turned CEO. What made you change jobs?

I thought that participating in the work of providing safe and effective medicines and medical supplies to patients is another way to carry on the vocation of a doctor. I have been [in the industry] for 15 years now, believing that providing help to many patients by improving the function of medicines and developing new drugs and improving their lives is the most valuable work. 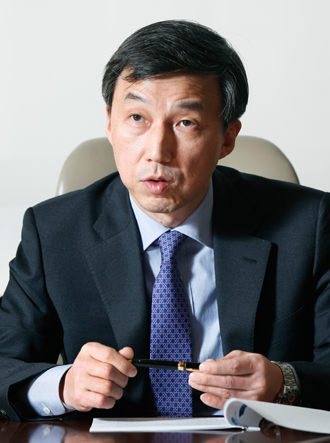 2010 - Board of director, American Chamber of Commerce in Korea