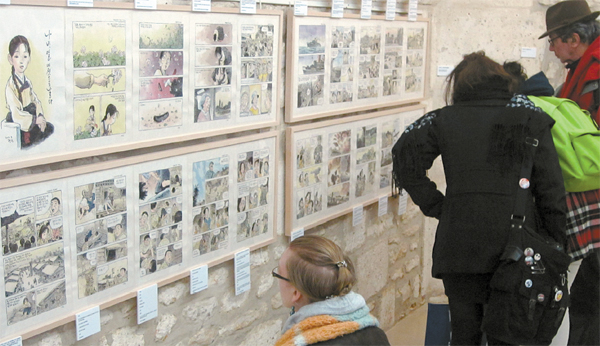 Visitors view “Butterfly’s Song,” by artists Kim Gwang-sung and Chung Ki-young, which depicts the plight of the women who were sexually enslaved by the Japanese military during World War II. The work was part of an exhibition at the 41st Angouleme International Comics Festival in France. Provided by a visitor

This year’s festival focused on the plight of the women and girls who were forced into sexual enslavement by the Japanese military during World War II.

France’s Angouleme International Comics Festival - considered the Cannes Film Festival of the comic world in France - is the largest comics festival in Europe. The annual event started in 1974 and draws some 200,0000 visitors each year. The exhibit at the 41st annual event kicked off last Thursday and depicts the experiences of those euphemistically known as “comfort women.”

Over the course of four days, 16,000 people gathered at the exhibition titled “The Flower That Doesn’t Wilt: I’m the Evidence,” which displayed the works of 19 manhwa, or comic artists, including works from popular graphic novelist Lee Hyun-se, who depicted the brutalities that the victims experienced.

In one narrative, told through 24 pictures viewed from right to left, an artist tells the story of an old grandmother, the victim of sexual slavery, who gradually transforms into a young girl. The piece, drawn by artist Shin Su-ji, is titled “83,” and signifies the number of years since the Manchurian Incident, which sparked Japan’s 1931 invasion of China’s northern region.

“I could feel the artist’s desire to return the grandmother to the days when [she experienced] no pain,” said Veronique Tesoni, 52, who attended the festival.

Exhibition attendees could also view an animation clip that introduced former comfort woman Kim Hak-sun, who broke her silence after four decades - a move that encouraged other women from Korea, the Philippines and the Netherlands to come forward with their stories and fostered widespread public awareness.

“I feel so much sadness for the young girls who had to live as sex slaves at such a tender age and yearned to go home. I heard [these comics] are based on the testimonies of victims of sexual slavery, and I am moved by their courage,” Amelie Jupe, a 28-year-old French woman, said after viewing the works. “Such an exhibit should continue to be held.”

The festival displayed works depicting brutality and sexual violence against women during wartime to mark the centennial anniversary of the start of World War I.

The opening of the exhibit on Thursday was attended by Cho Yoon-sun, minister of gender equality and family. Korea announced on Jan. 15 that it was holding an exhibit on the plight of comfort women at the European comic book festival - the result of a yearlong collaboration between the ministry, the Korea Manhwa Contents Agency and the Korean Manhwa Association.

The exhibit moved forward despite opposition by extremist Japanese civilian organizations, which sent to the local press a petition signed by 16,000 people calling for its cancellation.

The Japanese Embassy expressed “deep regret” over the exhibition, calling it a mistaken point of view, and even handed out pamphlets at the festival that outlined its position.

Organizers, however, shut down a Japanese publishing booth, which displayed a banner that read, “Comfort women do not exist,” claiming the booth was politicizing the event.

Korea has demanded a sincere apology from the Japanese government and compensation for the victims of sexual slavery. But Japan’s right-wing leaders and extremist organizations have refused to acknowledge the country’s historical misdeeds. Most recently, Katsuto Momii, the new chairman of NHK, the Japan Broadcasting Corp, received international backlash after claiming that all warring nations used comfort women. He even went so far as to name France, Britain and the Netherlands. The chairman also criticized Korea for demanding compensation for its aging comfort women, most of who are now in their 80s and 90s.

Franck Bondoux, director of the Angouleme International Comics Festival, said he hoped the exhibit “serves as an opportunity to repent for the past mistakes and errors.”

Likewise, Raphael Cuir, president of the France office of the International Association of Art Critic (AICA), a nongovernmental organization parterning with Unesco, told the JoongAng Ilbo on Thursday following the exhibit that “from the viewpoint of the organization, I think it was natural to accept the exhibit on comfort women issues.

“A very serious problem for [these] victims is that, for many reasons, they have been deprived the freedom of expression to tell their stories to the world. This problem must be resolved in order to discuss the issue of sexual exploitation. This exhibit serves as an important opportunity for these women to raise their voices to the international community.”

He further added that Japan denying the existence of comfort women “does not constitute as freedom of expression. ... When talking about the past, it has to be grounded in historical fact.”