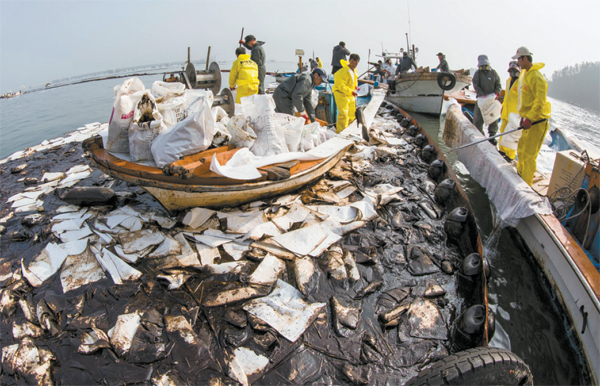 The Coast Guard works yesterday to contain the oil spill in the sea off the southern coast near Yeosu, South Jeolla. The leak erupted after a tanker hauling crude oil crashed into a landing bridge as it tried to dock at the port in Yeosu. By Oh Jong-chan

The scope of an oil spill on Friday that was spurred by a cracked pipeline in the sea off the southern coast has yet to be determined, authorities have said, but an oil band measuring 4 kilometers (2.4 miles) long and 1 kilometer wide has been detected.

The Yeosu Coast Guard and government officials worked to contain the spreading slick of oil throughout the weekend, trying to determine the potential volume of the spill.

The leak erupted after a tanker hauling crude oil crashed into a landing bridge as it tried to dock at the port in Yeosu, South Jeolla, after deviating from its route, the spokesperson for GS Caltex said.

The crash caused damage to a large oil pipeline operated by the Korean oil refinery company, which caused the oil inside the pipe to leak into the sea.

The 160,000-ton tanker Wu Yi San was about to offload crude oil at the jetty that it picked up last December at Hound Point in Scotland. The Coast Guard said that the tanker remained intact and no injuries were reported.

The refinery company estimated the amount of leaked oil to be approximately 800 liters (211 gallons).

Some local media outlets, citing a Coast Guard official, later reported that it could be as much as 10,000 liters. The Coast Guard has yet to make an official announcement.

“We have heard reports that claim as much as 10,000 liters [was leaked], but it has not yet been confirmed,” an official of the Yeosu Coast Guard told the Korea JoongAng Daily. “I believe the official estimate will be made [public] within a day or two.”

Kim Sang-bae, the head of the Yeosu Coast Guard, confirmed on Saturday that an oil band measuring 4 kilometers long and 1 kilometer wide had been located.

The slow verification of the spill’s breath has raised fears that it could take a toll on the local ecosystem. Local fishermen are afraid the incident could have devastating implications similar to those in 1995, when the Korean oil tanker Sea Prince ran aground during a typhoon, spilling 5,000 tons of oil on the southern coast.

In Shindeok Village, near the affected site, most of the nearly 600 residents make their living collecting Manila clams and sea mustard. Officials expect the incident will hurt the sale of sea food products from the area.

Oil containment booms were used to surround the spill, while responders used skimmers and vacuums to remove the oil from the water, according to the Coast Guard.

A pollution response team formed in the wake of the spill remained on scene to verify the cleanup’s completion. Kim said that nearly 70 percent of the oil spill has been contained so far.