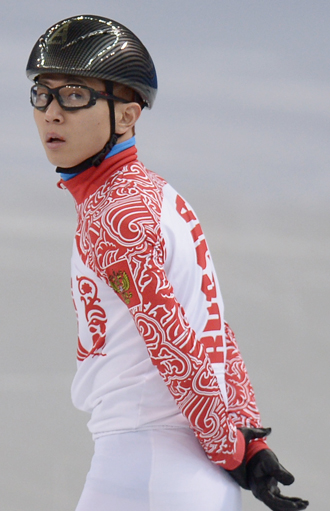 Many sports stars around the world have been known to acquire the citizenship of the country where they compete. Some athletes from Central and South American nations acquired citizenship in the United States while playing in Major League Baseball, and some football players from Africa became citizens of France, Italy or other European countries as part of Europe’s many popular and lucrative football leagues.

But in Korea, changing nationality has long been an extremely sensitive issue, especially for celebrities and star athletes.

Koreans still remember pop star Steve Yoo, aka Yoo Seung-jun, who refused to undergo his mandatory military service in 2002 after repeatedly promising to do so. He then acquired U.S. citizenship and left the country. Although 12 years have passed, Yoo has not been able to set foot on Korean soil since.

But for 29-year-old short track speed skating star Ahn Hyun-soo, changing his citizenship is totally different. Under the new name Viktor Ahn, he will race for Russia, the host country of the 2014 Sochi Olympics, which begin on Friday. Ahn acquired Russian citizenship in December 2011 to continue his career on the ice after falling victim to a power struggle within the Korea Skating Union.

Korea lost its most talented skater and must face Ahn in Sochi. But, unusually, it is not hard to find Korean fans who still support Ahn. Fed up with corruption and unfair gamesmanship, some say they would rather support Ahn than Korea in the Olympics.

Back in 2002, Ahn was considered the skater who would lead Korean short track for years after he won two gold medals in the World Junior Short Track Speed Skating Championships at the age of 17. He quickly grew dominant at senior level, winning gold in the men’s 500 meters, 1,000 meters, 1,500 meters and 3,000 meters at the Short Track Speed Skating World Cup in 2003.

But soon after Turin, Ahn became embroiled in a controversial struggle within the Korea Skating Union. In April 2006, his father, Ahn Ki-hyun, told the media that his son’s teammates had attempted to prevent him from winning the gold medal under orders by the team’s coach. Ahn’s father claimed the divide was rooted in fierce university loyalties - Ahn Hyun-soo was a graduate of Korea National Sports University, the country’s leading short track program, but some in the union wanted athletes from other universities to win in international matches.

The groundswell of public criticism directed at the skating union led to an inspection by the Korean Olympic Committee. The committee concluded that there was evidence that a coach (later identified as Jeon Jae-kuk) and several athletes (later identified as Lee Jeong-soo and Kwak Yoon-ki) plotted to fix the national team selection competitions held in April 2009 for the 2009-10 season.

In the fixed events, Lee made it to the national team in cooperation with Kwak, who focused not on doing his best but on helping Lee win, according to the committee.

On May 13, 2010, Lee Jeong-soo held a press conference where he said that Jeon, the coach, forced him to hand over his spot in the men’s 1,000 meter race at the Vancouver Olympics to Kwak. Although Lee denied it, the Olympic committee concluded that Lee’s swap with Kwak was in effect a return of favor for Kwak’s help in the 2009 national team selection race.

Days after Lee’s press conference, Kwak told the public that Lee asked him for help to join the national team. “Coach Jeon told me to help Lee at that time and I followed the order,” Kwak said.

Kwak and Lee were banned from competing for six months.

Ahn, who underwent knee surgery in 2008 and had a long rehabilitation, was dropped from the national team in 2009. His father later insisted that the union had changed its rules to disadvantage his son.

Public disgust with the skating union reached new heights in January when it was reported that one of the coaches on the women’s short track team had been accused of sexually assaulting a female student when he was a Korea National Sport University coach in 2012.

Some fans have started to turn on the national team because they think only failure in Sochi will force the government to reform the entire skating union. And Ahn may be the one who to end the nightmare.

Ahn joined Seongnam city government’s skating team in 2007, but the team was dissolved in 2010. Without a team, he had to train by himself and he was then disqualified in the national team selection competition held in April 2011. That is what led him to become Russian in December that same year.

“The reason I decided to do that was because I wanted to continue my career, but no one here [in Korea] would help me,” Ahn was quoted as saying.

Ahn was forgotten, yesterday’s man. But he made a huge comeback under the Russian flag last year, winning two gold medals, four silver and two bronze in the 2013-14 Short Track World Cup.

By comparison, all the competing Korean men combined won two gold, one silver and three bronze medals. On top once again, Ahn is now the Korean skaters’ biggest rival.

Regardless of the outcome in Sochi, Koreans will have tangled emotions whenever Ahn appears on the ice wearing a Russian uniform.

Should Viktor Ahn win any medals in Sochi, it is hard to imagine the faces of those involved in the 2009 match fixing, who helped push Ahn out of his own country. But no matter the results, someone must be held accountable for the country’s most talented skater changing nationalities.