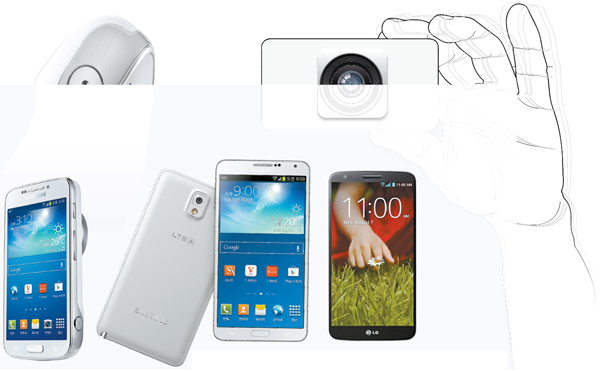 Korea’s top two smartphone makers are competing more fiercely over the quality of the cameras on their devices.Samsung and LG Electronics are not only focused on offering cameras with higher resolutions but also functions that prevent images from being blurred by even the slightest quiver of a user’s hand.

LG Electronics developed OIS Plus technology, which improved the existing optical image stabilizer (OIS) technology. That takes away the fuzziness in a photos even if a hand shakes or the photo is taken in motion.

OIS Plus has added electro image system (EIS) software. It not only corrects the blurring of images at the moment pictures are taken but also automatically revises the images after they are shot.

OIS Plus technology is expected to be offered in LG’s upcoming G Pro 2 smartphone, which is scheduled to be released at the end of this month.

Although the technology was not used in the Galaxy S4, it will be used for Galaxy S5, which will also be launched at the end of this month.

Samsung Electronics hinted it would unveil the Galaxy S5 at the Mobile World Congress in Barcelona on Feb. 24, sending out Samsung Unpacked 2014 Episode 1 invitations to local and foreign press. The invitation was titled Unpacked 5, sparking suspicion that it referred to the Galaxy S5.

Meanwhile, LG Electronics said yesterday it plans to use a 13-megapixel back camera with OIS Plus technology in its LG G Pro 2 to compete with the Galaxy S5. For the front camera, it chose a 2.1-megapixel camera with an improved lens and flash.

“The enhanced OIS camera and the creative camera UX (user experience) of G Pro 2 will add to the pleasure of using a large-screen smartphone,” said a spokesman for LG Electronics.

The major functions of its camera are Slow Motion, which plays a HD high-resolution video at one-fourth the normal speed, and Burst Shot Play, which displays 20 photos taken in a shot like a video.

Its UHD Recording allows the recording of a video in ultra HD high-resolution, while Flash Self Camera uses a flash to make shooting photos with the front camera possible in the dark.

Meanwhile, Samsung Electronics is reportedly planning to use its recently unveiled Isocell technology on its 16-megapixel camera sensors.

“The pixels of the camera module have been steadily advancing and 13-megapixel cameras are becoming mainstream in the recent flagship models, including Samsung’s Galaxy S4, LG’s G Pro and Sony’s Xperia ZR,” said an analyst at Hanwha Investment and Securities.

“Motorola’s Moto X is equipped with a 10-megapixel camera sensor, while Nokia’s Lumia 1020 used the highest camera specs for a smartphone, 41-megapixels. Competition among smartphone makers in terms of better cameras is still ongoing.”

Hanwha Securities also predicted that when the 16-megapixel is chosen for the flagship model of Samsung Electronics, the volume of smartphones with 13-megapixels will also increase.