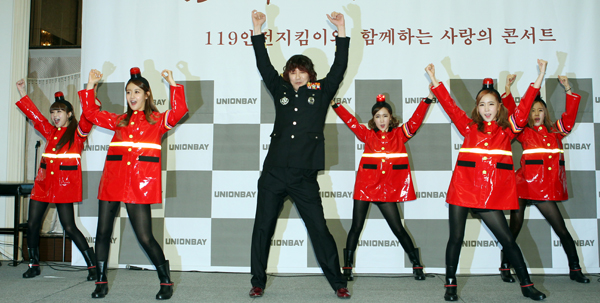 Kim held a press conference early yesterday to discuss the “Korea Fireman Project,” which he initiated himself.

“Originally, I was just going to release the track. But I wanted to develop it more, which is why I decided to have a press conference,” said Kim.

Kim said he chose Crayon Pop specifically for this project.

“It just had to be Crayon Pop,” Kim said. “Maybe it was because I have seen an online video [of firefighters abroad doing a cover dance of Crayon Pop’s ‘Bar Bar Bar’ dance].”

The project aims to show support for the firefighters in Korea who work under difficult conditions. The digital single titled “Hero” compares firemen to hidden heroes who always appear to save people from danger.

The five-member girl group was happy to participate in the project.

“We want to make good music and share the joy with the firefighters in Korea,” said the group. “We are getting very excited as the project progresses forward. We would like to participate in a project like this in the future as well.”

“Hero” was released yesterday at noon online through Korean music outlets. The song’s music video was released on Saturday.