Investors beginning to take a new shine to gold

Investors beginning to take a new shine to gold 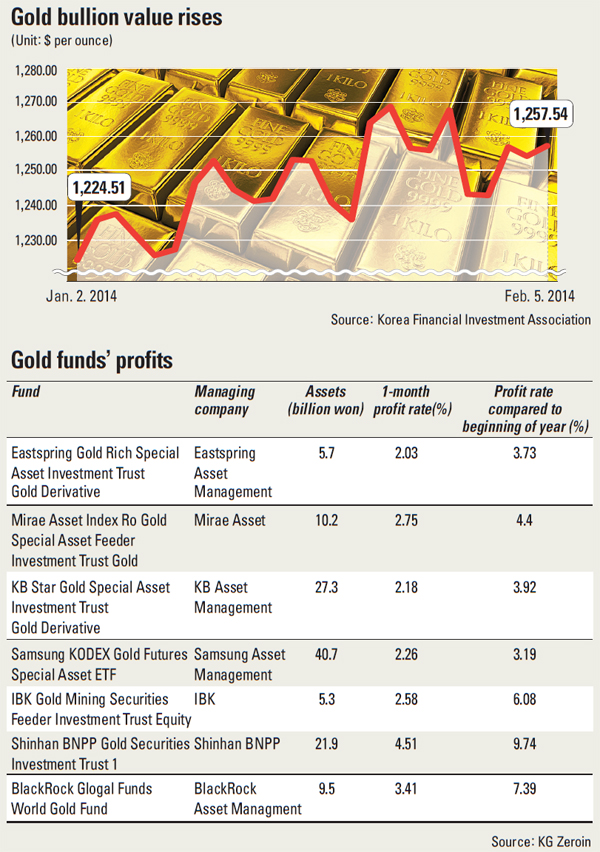 Gold, which lost most of its luster last year, is back on the table as investors search for safe assets while insecurity about emerging markets spreads, following the tapering operation of the U.S. central bank and disappointing manufacturing indicators coming out of China and the United States.

The value of gold bullion, which has dropped since the second half of last year on the back of growing optimism about the recovery of the U.S. economy, has regained momentum since the beginning of the year.

As of noon yesterday, gold bullion in Singapore was worth $1,255.67 an ounce.

Seoul’s main bourse, and markets across the globe, tumbled earlier this week after the Federal Reserve last week announced a further cutting down of its bond buying by $10 billion.

The U.S. central bank has started curtailing its unprecedented stimulus since December as economic indicators started to show signs of positive improvements in the U.S. economy in the second half of last year.

According to Bloomberg, roughly $3 trillion has been pulled out of equities worldwide so far as a result of the slump in emerging market currencies and decelerating expansion in China.

Central banks in emerging markets including India, Turkey and South Africa raised their key borrowing rates in order to diffuse the situation, but with no success.

Such panic has driven investors from emerging markets, and some are increasing their gold holdings.

Last year wasn’t a good year for gold as the global economy, particularly advanced economies, started to visibly improve in the second half.

The value of gold bullion dropped 28 percent last year. Gold usually loses its appeal when economies are back on track as countries start raising their borrowing rates and investors are willing to go for riskier investments such as equities.

In fact, in the second half of 2013, Wall Street enjoyed a bull rally that revised record highs several times.

With advanced economies, including the United States, showing signs of improvement, the International Monetary Fund (IMF) raised its global outlook, adding 0.1 percentage point to its previous forecast in October to 3.7 percent last month.

Such optimism ended a bull’s run for gold that started in 2000.

Gold’s popularity has risen particularly since the global financial crisis of late 2008 and afterward. The widespread fear of a sovereign debt crisis in late 2009 drove investors to gold, which resulted in a 24 percent rise in value.

The last purchase made was in February last year when the central bank bought an additional 20 tons. As a result, Korea now holds 104.4 tons, which accounts for 1.4 percent of the nation’s foreign reserves. It is estimated to be worth $4.8 billion.

This year, the profit rates of gold funds have turned around. Compared to a year ago, most of the funds still register a loss. On average the funds’ one-year profit rate is roughly negative 28 percent.

But when compared to the beginning of the year, gold funds have been posting an average increase of 4.4 percent.

Shinhan BNPP Gold Securities Investment Trust 1 is enjoying a near 10 percent profit rate as of yesterday. This is a big improvement considering the commodity fund profit rate is negative 1.22 percent for the same period.

Additionally, gold is the second most profitable type of fund after health care.

But not all agree that gold is back for good.

“There are some who believe that the bullion value has reached its bottom and will continue to rise as it has since the beginning of the year,” said Yoo Kyung-ha, an analyst at Dongbu Securities.

“However, it is too early to assume that it is back in full upward momentum for several reasons: gold mining companies’ production has fallen while gold demand in emerging markets [including China] is relatively low and there’s a possibility that mid- to long-term investment in gold could exit.”

The analyst projected the price of gold will actually pick up in the second half once emerging markets start increasing their purchases on the back of lowered bullion values while production will be reduced.

Deutsche Bank and BNP Paribas are projecting this year’s gold value to be between $1,098 and $1,400. Morgan Stanley and JP Morgan were also bearish, seeing gold price settling around $1,160 and $1,050, citing a global economic recovery that will result in higher interest rates.