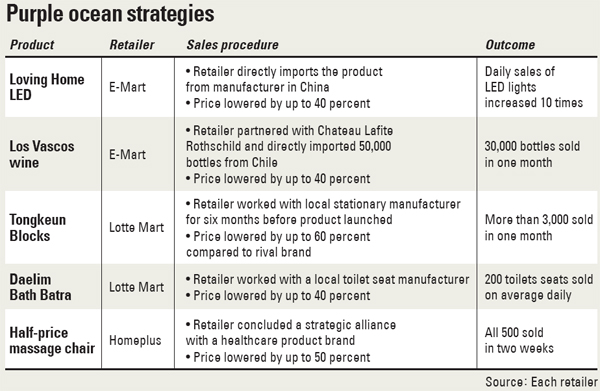 Park Bo-kyung, a 39-year-old homemaker, sighed deeply when she recently received the family’s electricity bill for December. It was 15,500 won ($14.40) higher than the previous month’s 46,760 won bill. She was convinced the bigger bill was a result of the government’s electricity rate hike that came into effect on Nov. 21.

“After seeing the December bill, we decided to change the light bulbs in our house to power-saving ones,” Park said.

A product that caught her eye was an LED light bulb in E-Mart’s Seongsu-dong branch in eastern Seoul. Park was informed by an employee at the store that this LED light bulb lasts longer than the usual fluorescent lamps and saves energy, but the price is similar - it is sold at 5,600 won per bulb. Park changed all 15 of the family’s fluorescent lamps to LEDs.

The light bulbs Park bought, called “Loving Home LED,” are exclusively sold by E-Mart. The retailer under the Shinsegae Group directly imported the product from a manufacturer in China in December and lowered the price by around 40 percent. Customers took notice of the high quality and relatively low price, and around 60,000 light bulbs were sold in just six days.

Large discount chains are making a new effort to bring exclusive products to their branches after studying consumers’ current needs. One of the reasons for the push is that retailers are facing many challenges to expansion from government restrictions designed to protect mom-and-pop stores.

Industry analysts say the discount chains are adopting the so-called purple ocean strategy by introducing innovative ideas and exclusive items after going into strategic partnerships. Purple ocean is supposed to be a combination of the blue ocean business strategy - creating new demand in an uncontested field - and red ocean strategy, which refers to traditional business competition.

“The purple ocean strategy is a way to survive falling growth following the compulsory holiday regulations and restrictions on opening new stores,” said Jang Joong-ho, director of marketing at E-Mart.

There are many ways in which retailers are promoting their own purple ocean strategies. Some develop their own private brands or private labels, or introduce “private national brands” in which a certain manufacturer provides its products to a certain retailer only. Retailers also directly import certain products from overseas and sell them at lower prices.

E-Mart, for example, partnered with the France-based Chateau Lafite Rothschild and developed a wine in Chile called “Los Vascos.” Within one month of importing 50,000 bottles to Korea, more than 35,000 bottles were sold.

Rival Lotte Mart introduced its own baby blocks last year ahead of Christmas. The retailer worked with a local stationary manufacturer and priced the product at around 60 percent cheaper than similar blocks.

Recently, it partnered with Daelim, a toilet seat manufacturer, and introduced the Daelim Bath Batra toilet seat, which is priced 40 percent lower than the usual rate. An average of around 200 are being sold every day at its nationwide stores.

Last September, Homeplus partnered with a health product brand called Hutech and introduced a massage chair with a price tag of 990,000 won, 50 percent lower than the normal price. All 500 massage chairs Homeplus ordered were sold in only two weeks.