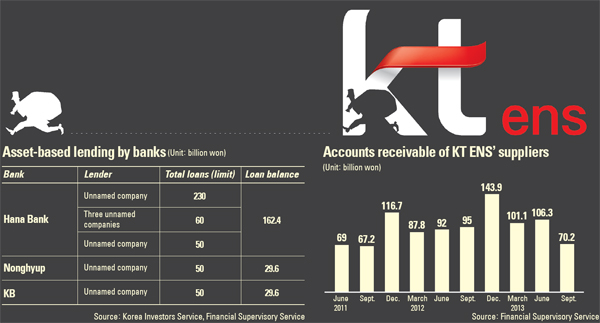 Banks at the center of a recent loan swindle involving the KT subsidiary KT ENS - Hana Bank, KB and Nonghyup - were found to have issued loans of more than 440 billion won ($410.6 million), much more than the 70 billion won of accounts receivable used as collateral.

One smaller supplier of KT ENS received a total of 330 billion won in loans.

The scandal, which is threatening the reputation of the country’s telecom giant and proving a headache for new Chairman and CEO Hwang Chang-gyu, is shedding light on local banks’ lax credit assessment systems.

Last week, the Financial Supervisory Service (FSS) and the police said a 51-year-old official of KT ENS, identified by the name Kim, was under investigation for allegedly embezzling 280 billion won ($260 million) in loans issued to a company that was set up by the KT unit’s contractors.

The company was created in order to use accounts receivable from KT ENS as collateral to borrow money from the three banks as well as 10 credit companies.

After the loans were extended to the paper company, the KT ENS suppliers and Kim of KT ENS took the money.

The amount of loans issued by the three banks to five suppliers through the paper company since 2011 was three to seven times higher than the amount of accounts receivable disclosed by KT ENS.

The company received 100 billion won in loans in 2012 from Nonghyup and KB through the paper company.

Revenues of the company in 2011, according to data from a domestic credit rating agency, were 850 million won, while revenues for 2012, estimated by a market information provider, were around 5 billion won.

The company does not disclose its sales.

Although it received 330 billion won in loans from three banks, neither the banks nor the financial authorities were aware of any problem.

The loans from the banks were issued to the paper company, not the supplier.

The three banks claim there was no problem when they issued the loans as the accounts receivable had a KT ENS stamp on them and the interest and principal payments were made regularly.

KT ENS says the documents backing up the loans are all fake.

The banks have not been repaid 221.6 billion won out of the total 440 billion won. Hana Bank has yet to be repaid 162.4 billion won, while Nonghyup and KB have 29.6 billion won each to collect.

In addition to this, 10 credit companies have not yet been repaid 80 billion won.

“The pre-screening and post-monitoring functions related to loans within banks did not operate at all,” said Oh Jeong-geun, a visiting research fellow at the Korea Economic Research Institute.

“The FSS also did not check the system properly.”

Financial industry critics said it was fairly easy for the banks to realize the loan amounts were excessive. They only had to check the annual business reports or earnings results of the suppliers.

There is a suspicion, therefore, that more people are involved in the fraud.

“We are now investigating whether there was a problem in the process of credit screening,” said a spokesman for FSS.

KT ENS said again yesterday that it has no record of having underwritten the loans, according to computational data by the Korea Federation of Banks.