‘Future heritage’ may give new life to old spaces

‘Future heritage’ may give new life to old spaces 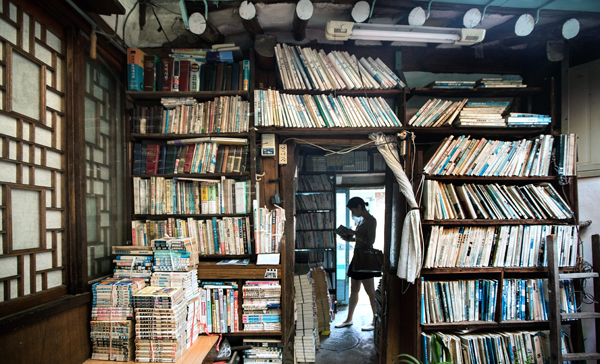 Just like pay phones have become almost extinct since the advent of smartphones, everyday gadgets such as televisions, personal computers and portable media players could one day face the same fate. Those items, plus others that haven’t been invented yet, could end up in a museum exhibit that shows how people lived in 2014.

Although such items are abundant now, they’re constantly being updated or traded in for the latest versions. But in the future, people might look back and have nostalgic feelings about the things we take for granted. The same can be said about restaurants, houses, museums or other intangible skills.

With that in mind, the Seoul Metropolitan Government decided recently to try to preserve some cultural sites or products that it thinks will have value in the future by designating them under the label “future heritage.”

The city government has worked with citizens and experts in evaluating 1,200 sites and items that might receive this designation. About 300 items are expected to be on the final list, which might be announced later this month.

“We are focusing on sorting out places and items that residents in Seoul can sympathize with the most,” said a city government official surnamed Lee. “Whether they have political, cultural or historical value, the items must already be recognized by citizens so that the people can understand why they are worth receiving the attention as something that can become a cultural heritage in the future.”

Anything being considered for designation as a future heritage in Seoul must be widely known among the city’s residents. Examples include Imun Seolnongtang, a restaurant that has sold beef soup for more than 100 years; Sujeong Motel, which was built in the 1960s; and Samilro Changgo Theater, the city’s first privately operated small theater, which originally had less than 70 seats but now has 100. Such places were more popular in the late 20th century, before new and fancy restaurants, hotels and theaters started to dominate the city’s landscape.

“What defines cultural heritage is that some artifacts or items or places [are deemed worthy] of being preserved by the government as time passes because they have become a significant [part of] the everyday lives of a certain period,” said Min Hyun-suk, a research fellow at the Seoul Institute, which studies future planning for the city.

However, many of those places are at risk of being lost because the city is constantly remaking itself to make the lives of its citizens more convenient, before the current buildings or sites have accumulated enough cultural value to be deemed worthy of preservation.

“Recently, buildings built in modern Korean history disappear under the guise of development for better life experiences, far before they get to build up any value and can be widely recognized, or for the public to decide whether they have enough value to be preserved,” said Min. “Hence, we don’t know if certain places are going to be worthwhile in the future, but because there is a good chance, we have decided to take precautionary measures to protect the existence of things.”

Because many of these potential future heritage items and sites are privately owned and operated - which differentiates them from designated cultural heritages that are owned and protected by the government or other public organizations - it is up to those owners and operators to have a sense of duty or responsibility to keep on running their businesses. Although the owners wouldn’t receive any financial support to keep running their businesses, the title might give them a sense of pride that what they do is part of the city’s tradition.

Blacksmith Park Sang-bum of Bulgwang Blacksmith in Eunpyeong, northwestern Seoul, one of the few blacksmiths who still makes custom tools by hand, says that he feels pride for having worked as a blacksmith for more than 20 years and continuing the family business, which was more than 40 years old when he inherited it.

“As I don’t see any hardware stores that still produce tools as my father and I do, I feel a sense of duty that I need to continue running the business,” said Park. “The business is now rare because we stick to the traditional way of making tools, and master craftsmen in leather or wooden products with 20 or 30 years of experience make up a great deal of our client base.”

Meanwhile, because a future heritage designation does not entail any compulsory action from the business owners, it’s possible that their businesses may disappear. So experts are encouraging citizens to pay more attention to Seoul’s many hidden charms.

“The general public needs to make efforts to recognize what is important through some social consensus, as the scope of cultural heritage can be widened depending on how much care people give, and from there we can discover the not-yet-known values of those artifacts,” said Park So-hyun, an architecture professor at Seoul National University.

“What your grandmother used will only gain more value as time passes, so keeping such old items can later draw [more attention] as people would want to sympathize with the history.”

If residents welcome such projects and want to walk down memory lane, the city government might also consider further developing those places as part of major sightseeing destinations.

“We can make a walking trail so that both local citizens and foreign travelers can enjoy learning more about the modern history of Korea,” said government official Lee.

Another option is to build a library in Seongbuk District, northern Seoul, where prominent novelist Park Kyung-ni (1926-2008) used to live, to give the neighborhood more of a literary feel. Or Changshin-dong in Jongno District, central Seoul, the former home of Western-style art painter Park Su-keun (1914-1965), could have more shops and galleries featuring artwork. Each neighborhood could have a cultural theme that would benefit not only its own residents but also attract more visitors to revive the local economy. Blacksmith Park said he might allow visitors to his shop enjoy the hands-on experience of making a tool without using a machine. 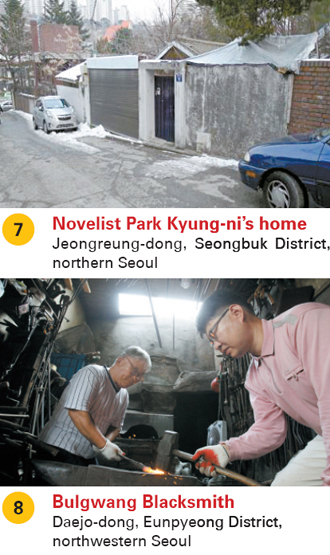 In addition, tourism based on cultural assets is becoming the focus of more research.

“We might work on studies on tourism based on cultural or historical experiences within the first half of this year, as there has rarely been a study on them, although they are essential to stimulating the tourism sector,” said Kim Yong-jun, a manager at the Korea Culture and Tourism Institute.

The city government is setting up a website, futureheritage.seoul.go.kr, to take suggestions from citizens and cultural experts on potential future heritages. The site is currently only in Korean, but the government will consider adding other languages, including English, Japanese and Chinese. A second list of potential future heritages is expected to be released next year.

Here are some of the potential future heritage sites:

The store, one of Seoul’s oldest, opened during the 1950-53 Korean War. It was turned into a book cafe last year. A man who was injured during the war opened a used bookstore in his home and travelled to collect books, while his wife sold them and greeted customers. After the number of customers declined steadily, the couple’s daughter turned the store into a cafe. She also opened a Facebook page for the bookstore, renamed the Dae Oh Bookstore 33 Cafe, to attract more visitors. The store doesn’t sell books anymore.

The spa officially opened in Gye-dong, Jongno District, central Seoul, in 1969. However, it has been catering to customers without any business registration since the 1950s. As the spa is in the northern heart of the capital, many owners of big businesses and well-known politicians were among its regulars. Many residents in nearby neighborhoods come to take a bath in the building, which has kept its old facade.

The theater in Myeongdong, central Seoul, which opened in 1975, is one of Korea’s first privately run theaters. It is still operating, but it faced closure many times because of financial reasons. It was reopened in 2011 after being used as a factory space for local manufacturers.

Albert Taylor, a former Seoul correspondent for United Press International, built his home in Jongno District, central Seoul, in 1923. The American reporter wrote about Korea’s movement to be liberated from Japan’s colonial rule, which led to the deportation of him and his wife to the United States by Japan. It has been said that his son, Bruce, was born in Severance Hospital in Sinchon, northwestern Seoul, the day before the March 1 Independence Movement, one of the earliest public displays of Korean resistance against Japanese colonial rule. A copy of a letter that declares Korea’s independence was hidden under the infant’s blanket as Japanese authorities raided the hospital, where the letters were printed.

This five-story apartment building in Seodaemun, central Seoul, which was built in the 1930s, is the city’s oldest apartment building. Unlike other residential buildings, it hasn’t gone through a renovation. There is a garden courtyard in the center of the building that resembles a triangle when seen from above. Inside, inner corridors connect the main entrances to individual units. The first floor is now dominated by small stores.

The barber shop in Mapo District, northwestern Seoul, has kept its facade since its opening in 1927. Owner Lee Nam-yeol learned his barber skills from his father and continues to run the business that his grandfather started. Instead of electric razors, Lee still uses a straight razor that he sharpens every day.

Park Kyung-ni, famous for her novel “The Land,” lived in Seongbuk District, northern Seoul. The novelist, who lost her husband during the Korean War, devoted her life to writing. The book was translated into many different languages, including Japanese, English and French.

The store has been operating for more than 60 years in Bulgwang-dong, northwestern Seoul. Craftsmen and consumers who want custom-made tools for home gardening are the shop’s most frequent visitors. The owner, Park Sang-bum, still works with his father, from whom he learned his trade.