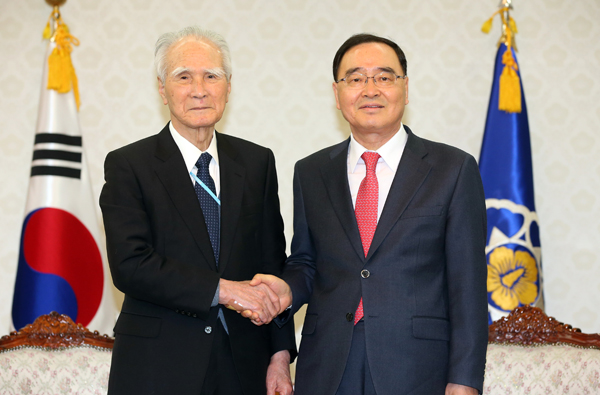 Prime Minister Shinzo Abe directed another insulting remark at Korea by stating that Seoul’s handling of the issue of so-called comfort women was a “serious slander against the Japanese government.”

Addressing a budget committee in the Diet on Wednesday, Abe said that he will counter “the enlisting of inaccurate facts to seriously slander Japan,” referring to Korea’s demand that Japan acknowledge, apologize to and compensate women forced into sexual slavery by the Japanese military during World War II, euphemistically referred to at the time as comfort women.

Abe’s remark seems to reject the Kono Statement of 1993 issued by then-Chief Cabinet Secretary Yohei Kono, which apologized for physical and psychological damage and indignities suffered by Asian women recruited by the imperial government to serve as sex slaves for the military.

Abe further said that it is “an important role of the government to respond to promotional activities that are based on inaccuracies.”

His remarks came as the comfort women issue has been gaining more attention globally, including at an international comics festival in France and in a movement in several U.S. state legislatures to educate local students on historical and territorial issues between Japan and Korea.

Abe’s callous remarks on historical issues, highlighted by his visit to Tokyo’s controversial Yasukuni Shrine in December, has drawn a backlash not only from victim countries such as Korea and China but also from the international community.

The article quoted a U.S. Embassy spokesman in Tokyo as describing “ahistorical and offensive statements” by leaders of Japan’s public broadcasting network as being “preposterous.”

The editorial described the comfort women system as “a uniquely Japanese system that enslaved thousands of women, mostly Korean, transported them to military bases and forced them to engage in sex - to be routinely raped by Japanese servicemen.”

Murayama emphasized that his own 1995 statement apologizing for Japan’s wartime aggressions should be adopted by the current administration.

Analysts said the visit to Seoul by Murayama, Japan’s first prime minister to meet with Korean comfort women, was covered extensively in Japan and may have conveyed a message back home.