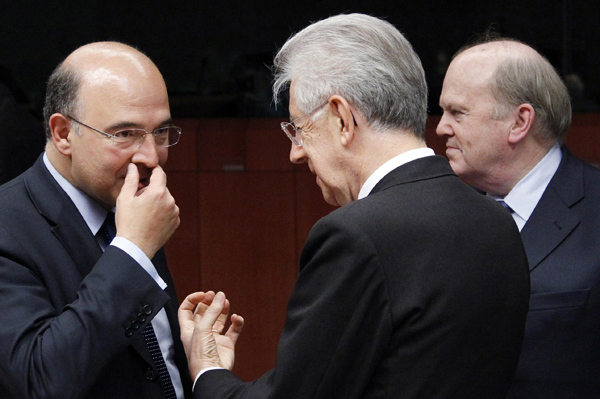 BRUSSELS - Late last year, euro zone finance ministers reached a compromise on the basic elements of the Single Resolution Mechanism (SRM) - that is, how to deal with banks in difficulty. It looks ugly, but it also appears likely to work.

The main ingredient of the compromise is to use separate national funds in case a bank needs to be saved, while also creating a common Single Resolution Fund (SRF) of up to €55 billion ($75 billion) over the next 10 years, which is to be financed by contributions from the banks themselves. The entire SRM would be run by a collection of national supervisors and reps from the European Central Bank and the European Commission.

The defects of this compromise are apparent. For starters, the SRM will not be a “single” mechanism at all. National funds - and thus national authorities - will continue to be responsible for “their” banks’ problems, with the SRF’s contribution to any rescue operation rising only gradually. It will be at least a decade from now - roughly the year 2025 - before the SRM is really “single,” with the use of separate national funds ending.

That is, of course, a long transition period. But, because the ECB is in the process of conducting an asset-quality review of bank balance sheets, there is little danger that too many skeletons will remain in banks’ closets. Moreover, after five years (by 2020), the SRF could already have close to €30 billion available, more than most national funds, thus providing an important backstop should any national fund be insufficient.

To be sure, it is not ideal that the SRM will cover only those banks - around 120 in total - that will come under the ECB’s direct supervision at the end of this year. But this makes sense at the start, when the ECB will have its hands full getting a grip on the banks under its control. Theoretically, the ECB is also the indirect supervisor of all of the 1,000 or so smaller banks in the euro zone, but it will take some time before this becomes effective.

Another inelegant part of the proposed arrangement is that the SRF will not be part of the EU machinery; instead, it will be established by an intergovernmental treaty (now being rapidly negotiated among euro zone member countries). But this intergovernmental agreement is likely to be only a transitory solution. There have been other cases of major initiatives that started outside the legal framework set by the EU treaties, but that were later incorporated into the acquis communautaire (the body of EU law), thus bringing them under the control of the Commission and the Parliament. This is what happened to the Schengen free-travel area, for example. The same is likely to happen with the SRF.

The incredibly complicated decision-making process that has been proposed for the SRM, which, on paper at least, would involve more than 100 individual officials and many committees, is also unlikely to represent a real obstacle, as bank restructuring usually has to happen in a matter of days, typically over a weekend. The few who know the details of a particular case will make the key decisions, while the rest, with little knowledge of (or stake in) the matter, will be politely asked to go along. When the SRM and the SRF are brought back into the EU system, the decision-making mechanism will need to be revisited.

The size of the SRF has often been criticized as being insufficient. But this is wrong: €55 billion would be enough to deal with all but the very largest banks in Europe. It would also be sufficient to deal with a crisis in small to midsize countries like Ireland or Portugal. Even Spain needed “only” €60 billion from the ESM at the peak of its crisis. In any event, a restructuring fund can be only a first-aid kit to deal with an isolated accident (or two). Systemic crises always require a fiscal backstop. On this account, the SRM proposal is also incomplete.

But at least the euro zone now has a permanent mechanism to support governments facing difficulties. While there is no clear agreement, there is little doubt that if a major crisis threatens the SRF, the funds needed to save the euro zone’s banking system from collapse will be found, because all member states participating in the SRM will have an incentive to back up their common investment.

The plan for the gradual Constitution of a common resolution fund constitutes an awkward step in the right direction. It leaves as many problems unresolved as it addresses. But the end result is likely to be quite strong, because it establishes a key innovation: a common fund that effectively mutualizes much of the risk resulting from bank failures.