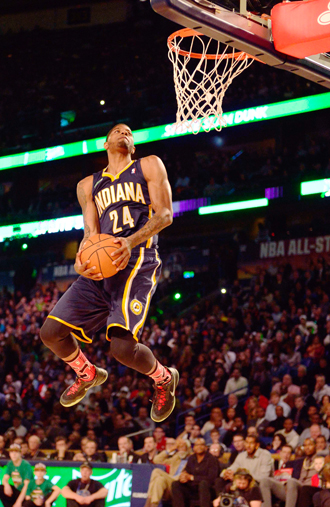 John Wall soared over his own mascot as the East stomped on the West in the slam dunk contest at the NBA’s All-Star Saturday.

Answering Sacramento rookie Ben McLemore’s dunk in which he leaped over Shaquille O’Neal seated on a throne, Wall took the ball from over the head of the Wizards mascot, brought it between his legs and slammed down a reverse dunk.

“It was only my second time doing it. My first time was on Thursday,” Wall said.

“So I just felt comfortable with myself and I knew it was a dunk that hasn’t been done before.”

Judges Dominique Wilkins, Magic Johnson and Julius Erving all gave the victory to Wall in his matchup, after previously voting for George over Golden State’s Harrison Barnes, and defending champion Ross over Portland’s Damian Lillard.

Earlier, San Antonio’s Marco Belinelli won the 3-point contest, and Lillard and Utah rookie Trey Burke won the skills challenge to give the Western Conference two victories on the night.

The NBA tried to jazz up All-Star Saturday for its return to New Orleans, with a number of tweaks to the format.

The biggest was in the dunk contest, which was broken into two parts. The first was the freestyle portion, where the teams had 90 seconds to execute as many dunks as they could, before the three 1-on-1 matchups in the battle format.

McLemore came out wearing a king’s robe and was trailed by O’Neal, a new minority owner of the Sacramento Kings. McLemore made it over O’Neal’s throne on his second attempt, and the 15-time All-Star center presented him with a crown.

Moments later, however, Wall make it abundantly clear who was the real king.

“The slam dunk has returned,” said Erving, one of the NBA’s most famed dunkers.

Belinelli needed to win a tiebreaker in the 3-point contest to beat the Wizards’ Bradley Beal.

Beal had made his final six shots, including two “money balls” worth two points each, to tie Belinelli’s final-round score of 19.

The Italian then racked up an event-high score of 24 for the win.

“I was a little bit nervous at the beginning and I think that I shot like two airballs,” Belinelli said. “But in the end I was focused. I really cared about this trophy.”

Lillard and Burke beat the Eastern Conference tandem of Michael Carter-Williams and Victor Oladipo in the skills challenge, which consisted of dribbling around obstacles, passing to targets, and hitting shots from medium and close range.

Bosh, meanwhile, hit a half-court shot to give his team victory in the shooting stars contest that opened All-Star Saturday.

Each team had to hit shots from 10 feet from a right-side angle, the top of the key, 3-point range and half court, with the best time winning.