To Thursday: “Graphic Novel” is a group exhibition of East Asian artists inspired by comics, such as Lee Dongi of Korea, Sun Xun of China and Koichi Enomoto of Japan.

“The three artists were teenagers in the 1980s and 1990s when color televisions became popular,” the museum said. “Sub-culture, including games, animation and cartoons, formed their inner selves in a dream world.

“The exhibition aims to read the differences of characteristics, perspectives and purposes between the artists representing graphic novels in Korea, Japan and China.”

To Sunday: This is a solo show of Philippe Halsman (1906-79), who was a renowned Latvian-born American portrait photographer whose pictures appeared on the cover of 101 issues of Life magazine.

According to the organizers, Halsman intended to show the true nature of people and developed a philosophy of “jump photography,” in which he asked his models to jump. The models included famous actresses Marilyn Monroe, Audrey Hepburn and former U.S. President Richard Nixon.

In this exhibition, more than 200 of Halsman’s works are presented for the first time in Korea, along with the props of some of the celebrities in his photos.

This exhibition is a gigantic multicanvas painting, “Bigger Trees Near Warter,” by David Hockney, 76, one of the most important living painters.

The painting, which was created in 2007 by the British artist and housed at the Tate in London since 2008, is part of the two museums’ exchange and collaboration programs. Occupying 50 canvases, the painting measures 4.5 meters high by 12 meters wide (14 feet high by 39 feet wide), making it the largest of Hockney’s recent works. 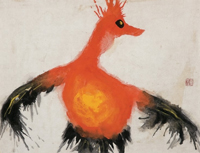 JESUS AND THE DEAF SHEEP

To March 16: Why not paint Jesus Christ, the Virgin Mary and the Apostles in hanbok (Korean traditional clothing), with Korean appearances in Korean settings? That’s what Kim Ki-chang (1914-2001), one of the most important artists in Korean modern art history, did. Kim, better known by his pen name Unbo, made 30 paintings in 1952, amid the 1950-53 Korean War, in the traditional East-Asian style that depict the life of Christ from the Annunciation to the Crucifixion and Resurrection.

The museum is exhibiting them with an additional 30 paintings by Unbo to honor the 100th birthday of the artist, which is this year.

Admission is 9,000 won for adults and covers admission to Seokpajeong, a hanok (traditional Korean house) behind the museum that was once the summer residence of King Gojong’s father.

To March 23: This is a solo show of the renowned artist Hiroshi Sugimoto, 65, who has presented monochrome photography that combines “conceptual thinking and formalistic simplicity” for more than four decades.

The exhibition includes not only his famous photographic series “Theaters” and “Portraits,” but also conceptual sculptures and a video work based on his “Sea of Buddhas” series. A total of 49 of his works are on display.

Sugimoto has been more of a conceptual artist than a photographer, as he uses photography for his philosophical questions, such as whether photography is the most authentic tool for representing reality and recording history.

This approach is apparent particularly in his “Portraits” series, which was commissioned by Deutsche Guggenheim in 1999, and his “Dioramas” series, which he started in 1975.