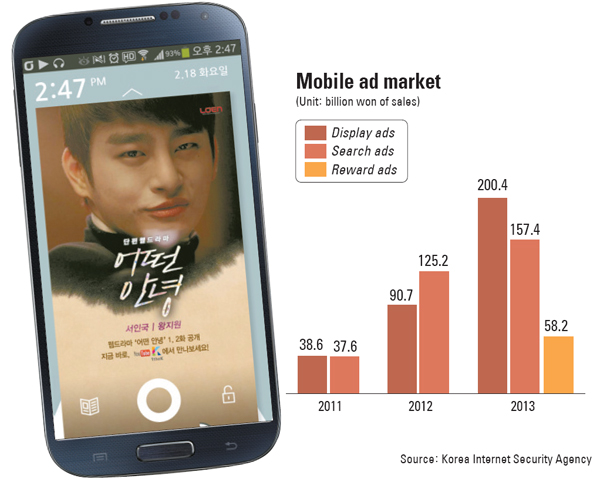 Kim, a college sophomore, has a habit of constantly turning on her smartphone screen even though it depletes her battery more quickly. That’s because the Cash Slide reward-based ad app that pops up credits her with as much as 2,000 won ($1.88) when she unlocks the screen.

“It takes quite a long time to accumulate enough to transfer the money to your bank account, but you can purchase something or make a small donation to charity with the pocket money collected through this app,” she said.

As most young people these days use their smartphones for information, entertainment and daily business, the Korean mobile ad market has exploded.

According to a report released yesterday by the Ministry of Science, ICT and Future Planning and the Korea Internet Security Agency (KISA), the mobile advertising market was worth 416 billion won ($319.1 million) in 2013, an increase of 93 percent compared to the previous year.

Display ads, which appear as banners or commercial slogans, which pop up on mobile websites or apps, were nearly half the mobile ad market last year, followed by ads triggered by search engines (37.8 percent) and reward ads (14 percent).

Though they were a distant third in market share, the report highlighted reward ads as a next-generation advertising platform that has the highest growth potential.

The report noted that 60 percent of consumers exposed to reward ads made purchases, compared to 31 percent for display ads and 38 percent for search ads.

First appearing in the market in 2011, reward ads mostly take the form of apps.

Cash Slide, with 8.5 million cumulative downloads, and Ad Latte, with 9 million, are the most popular reward ad apps.

While Cash Slide briefly shows ads on the lock screen and lets users choose whether or not to access the ad, Ad Latte awards money for watching commercials and solving advertising-related quizzes.

The apps allow users to accumulate points that can then be redeemed at a wide range of offline stores partnered with the app. They include fast food and cafe chains, convenience stores, bakeries and cosmetics brands. Points can also be used to enjoy music and television shows online and for discounts on mobile phone service.

Both apps have already expanded to overseas markets. However, they are currently available only on Android operating systems. Cash Slide launched in Japan last June, and Ad Latte is now in Singapore.

According to a spokesperson from Cash Slide, the company plans to enter the Chinese and United States markets and will begin preparations to make the app compatible with Apple’s iOS platform.

In a bid to foster next-generation ventures like these two developers, the ICT Ministry plans to support small and midsize ad companies by offering feedback from a group of about 200,000 panelists.