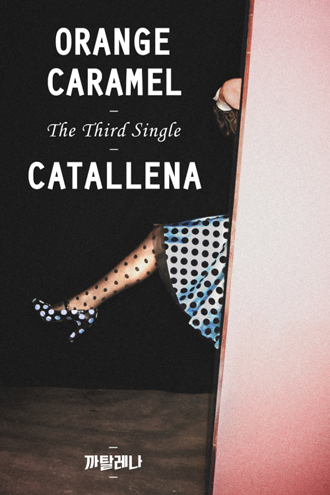 Orange Caramel, a subunit of the K-pop girl group After School, teased their third single, releasing the image of a women’s leg poking out from behind a wall in a polka-dotted dress and stocking.

Their agency, Pledis Entertainment, did not give out any additional information about the single, only posting the brief message: “Orange Caramel - The Third Single - Catallena.” Pledis said it would release two more photos by tomorrow.

Since the surprising success of their first quirky single “Magic Girl” in 2010, the trio has built a solid following, emphasizing a cuter side than After School’s more feminine style.

This is Orange Caramel’s first new music in Korea since 2012 when they released their first full-length album, “Lipstick.”

Meanwhile, After School is set to release its second full-length album in Japan, titled “Dressed to Kill,” in March.