Assembly gets to work, but 55 reps fly the coop

Assembly gets to work, but 55 reps fly the coop 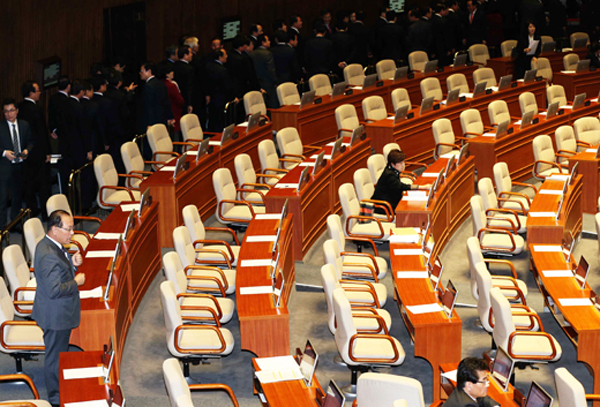 Hwang Woo-yea, left, chairman of the Saenuri Party, looks at empty seats in the National Assembly yesterday as more than 50 lawmakers from the ruling and opposition parties were absent from yesterday’s plenary session. By Oh Jong-taek

At a plenary session of the National Assembly held at 2 p.m. yesterday, more than 50 lawmakers from both the ruling and opposition parties were absent. Assembly Speaker Kang Chang-hee wasn’t in his chair. Vice Speaker Park Byeong-seug of the Democratic Party played substitute.

The lawmakers were out of town - far out of town. Some were as far away as Antarctica.

Despite a myriad of pending bills, 55 lawmakers skipped the session for apparently urgent overseas missions, which are paid for by taxpayers. A total of 27 bills were scheduled to be voted on yesterday, including the appointment of a Supreme Court justice.

Critics said the country would be better off if they stayed home and passed laws, the job they were voted into the Assembly to do.

Representative Chung Mong-joon of the ruling Saenuri Party left yesterday morning for a four-day mission to Beijing. He is leading a 40-member delegation, the largest this season, which includes nine members from the opposition DP.

Aides to the seven-term lawmaker said that the delegation will meet with Chinese President Xi Jinping. The trip is important for Korea’s diplomatic relations with a rising China, they said. They emphasized that the trip was “a diplomatic one,” not merely for sightseeing.

Concerned about possible repercussions from sending a large number of lawmakers on an overseas trip during a general session, Saenuri floor leader Choi Kyung-hwan asked Chung to downsize the delegation Wednesday during a party meeting at the National Assembly, only to be rebuffed.

During the meeting, Chung suggested Choi talk with his opposition counterpart to change the schedule of the general session, dumbfounding Choi and leading to a verbal brawl between the two during the meeting. All the expenses for the 40-member trip to Beijing will be paid for by taxpayers.

Speaker Kang Chang-hee missed the general session because he embarked on a 15-day trip Feb. 8 with seven lawmakers, four from the Saenuri and three from the DP, to New Zealand, Australia and the Antarctic. They return home Saturday.

This month, Korea opened its second research station in Antarctica.

In Kang’s absence, Park, the vice speaker, presided over the meeting yesterday in which key legislation including the basic pension plan for seniors was voted on.

An aide to the vice speaker said in an interview with the JoongAng Ilbo that it was unprecedented for a vice speaker from the opposition party to preside over a general session of the Assembly because the speaker was absent.

The aide asked for anonymity.

Another group of seven lawmakers, three from the Saenuri Party and four from the DP, departed for Russia Wednesday to attend the closing ceremony of the Winter Olympic Games in Sochi - five days prior to the event, which takes place early Monday morning Korea time.

“But there is one vested right that lawmakers must have all the time: the power to pass laws at the Assembly.

“It’s ironic that representatives are willing to give up their legislating right to enjoy other privileges afforded to them as politicians.”